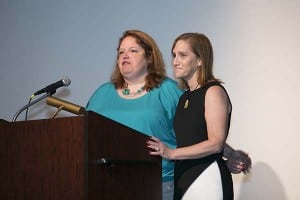 The Jewish Community of Louisville Annual Meeting, held Sunday, June 14, at the JCC, was a celebration of volunteers and achievements, but it was also a celebration of the JCL, what it has accomplished over the past year and its hopes for the year to come.

The Jewish Heritage Fund for Excellence, which was established just three years ago, is a major funder for the JCL, and Sandy Hammond, JHFE Board Chair, described the relationship with the JCL as “an important part of our mission.”

“In 2014 and 2015 alone,” she continued, “we have partnered with the JCL in various initiatives that total more than a million dollars, including contributions to the Annual Campaign, an award to camp and Israel scholarships, various support mechanisms for our seniors, investment in infrastructure at our JCC, sponsorships of the Jewish Film Festival and many other cultural and programmatic ventures.”

“To ensure that we have a lasting, thriving Jewish community for generations to come,” Hammond said, the JCL and JHFE will have to continue to work together.

JCL President Karen Abrams, who ran the meeting, thanked JHFE for its support and partnership in helping “build and sustain a vibrant Jewish community in Louisville.” 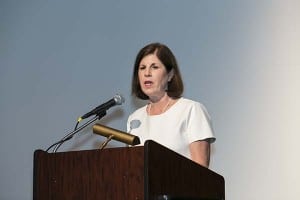 What’s Happening at the JCC
Programming at the JCC is an important part of what the JCL is and does. After acknowledging the help she receives from Co-Chair Amy Ryan, Program Cabinet Chair Jennifer Leibson shared some highlights from the JCC. The celebration of the agency’s 125th anniversary included a Tip-Off event and special art exhibit in January and a packed house for the Broadway Musicals: A Jewish Legacy event that was collaboration between the Jewish Film Festival and CenterStage.

The festivities continued in March as the JCC honored Annette Sagerman and in May, the JCC’s 125th anniversary float won the grand prize in the Pegasus Parade earning the first perfect score ever and there was a successful Mother’s Day brunch featuring the author of Nothing Like a Dame.

Leibson told the audience there are more JCC@125 events yet to come: an Athletic Hall of Fame event on July 27, a 125th Festival on August 23, a girls’ fashion show in August, a Dreidel Dash on December 6 and a JCC Gala to wrap it all up on January 23, 2016.

Other highlights she pointed out include seven months of exceeding membership goals has led to 2,450 membership units – “the most active members that we can find in recent records.”

Thanks to Mike Steklof, the BBYO program is very strong; and both Jay Levine BBG and Drew Corson AZA received chapter excellence awards at the International Convention.

CenterStage marked its 100th anniversary with a yearlong celebration, culminating in a sold-out run for Fiddler on the Roof.

To welcome newcomers, Shalom Louisville has recently been restarted and Shalom Baby continues as a popular program. Camp, under Betsy Schwartz’s leadership, has just started and “the energy is palpable here in this place,” Leibson observed. She also welcomed Noga Peled, this year’s Israeli shlicha.

The JCC also hosted the Partnership2Gether Steering Committee meetings in March, welcoming Israelis and leaders from other communities.

Leibson encouraged people to check out Frank Weisberg’s show in the Patio Gallery and noted that the agency now offers over 90 group fitness classes.

“From our preschool families to our seniors,” she said, “you can see there is really a feeling that people are proud to be members here and proud to be part of our Jewish community.” 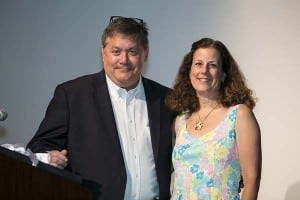 Campaign Report
In wrapping up his second year as chair of the Annual Federation Campaign, Doug Gordon was able to report that the 2015 Campaign raised over $2.1 million for the community – a five percent increase over the prior year.
“This year,” he said, “We were successful in changing the way the Campaign has run.” By implementing an intense 10-day span called the Week of Giving that culminated in “the most fabulous million dollar dinner out at the Standard Country Club with a great speaker and Jonathan Wolff” providing entertainment, the pace of the entire Campaign was accelerated. In addition, there were 175 new donors to the Campaign.

Gordon thanked the Campaign Cabinet, vice chairs Leon Wahba and Ariel Kronenberg and the JCL staff and announced that Wahba will chair the 2016 Campaign. He quipped that he was “starting the reelect Leon Wahba for one more year campaign, because it takes two years to really get this job done in the way you’re going to want it to be done.”

President’s Report
In summing up her two years as JCL Board chair, Karen Abrams was able to point to solid achievements and forward momentum that began with developing and implementing a new strategic plan that defined the agency’s mission “to build and sustain a vibrant, caring, inclusive community rooted in Jewish values” and its vision as “fulfilling the needs of the Jewish community.”

“Everything we have done and continue to do stems from our mission and vision statements,” she said, “and I am proud of our commitment to building our community.”

Among the things she and President and CEO Stu Silberman instituted are quarterly meetings with the Louisville Board of Rabbis and Cantors and with the past presidents. The JCL has also embraced feedback, participating in JCCA benchmarking and working with JCCA consultant Dori Dennelle on a Board self-assessment, and then acting on the recommendations.

This has also been a time to gather information. A Land Use Committee analyzed where the JCC’s constituents live and determined that we need a presence on Dutchmans Lane and we need to offer some programming in other venues. An example of this is a joint membership program with Standard Country Club for pool and tennis.

The JCL is also working with a consultant to determine the ideal footprint and space planning for the agency.
“We are very appreciative of the generosity of the Jewish Heritage Fund for Excellence,” Abrams stated. “They supported us with $200,000 for our building and partnered with us for the Meet the Challenge Grant, matching the $120,000 we raised.” Among the things this investment made possible are the new ramp, CenterStage’s new chairs, remodeled locker rooms, scholarships that help families send their children to overnight camp and Israel, and outreach and teen programming. “JHFE’s support is making a huge difference in our community,” she said.

She recapped some of the Campaign highlights reported by Doug Gordon and thanked him for his hard work.

For Abrams, one of the most fulfilling experiences of her term was interacting with the seniors – sharing lunch with them and helping them get the garden going. “I encourage each of you to have lunch one day downstairs and warm your hearts,” she said, adding words of praise for Senior Program staff Diane Sadle, Slava Nelson and Chef Garry.

She thanked Silberman “for bringing us to a better place. We are all excited for him as he becomes the Federation director in Minneapolis and helps them move to a better place.” She also thanked the Board, Executive Committee and staff.

Jay Klempner, she said, has been “the best chair-elect a Board chair could have. Jay is always available. He works hard and he cares so much. We are all in good hands.” She also singled out Jane Goldstein as her mentor.
“Jay and Sara [Wagner],” she concluded, “I envy you. The next two years are going to be very exciting. We will know our ideal footprint. We will know whether we can afford to renovate and/or build. We will be in an even better financial place.”

Silberman presented Abrams a gift of appreciation for her service. 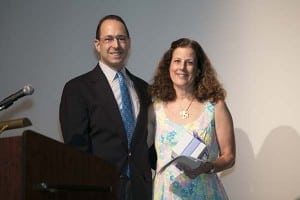 Silberman’s Farewell
When he first came to Louisville, Silberman said, the community was facing the great challenge of bringing the Federation and the JCC together into one agency and there were many doubters. “They were very concerned about Louisville’s Jewish future,” he said, “and didn’t see what we now see today, a bright future ahead of us.”
Through passion, commitment and intellect, Silberman said, “the JCL has emerged as a shining example nationwide of what communities can do when they choose to find a new way of operating.”

Silberman credited the lay/professional partnership he enjoyed with David Klein, z”l, with enabling the JCL to become the agency it is today. “David spent his final few years fully engaged in helping me deliver what many said couldn’t happen,” he said.

Silberman also thank the agency’s supporters for “your commitment to our Jewish community,” adding that he and his family “will forever be grateful to Louisville for giving me the chance that you did five years ago.” 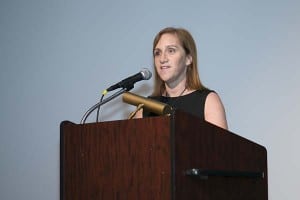 Sara Wagner
Incoming JCL President and CEO Sara Wagner took a moment to reflect on when she returned to Louisville, her hometown, 25 years ago, and it was the first Campaign event for both Wagner and Karen Abrams.

Jeanie Goykhberg was a New American who came during Operation Exodus. She told the story of why it is so important that we save people and helped families from the former Soviet Union, Wagner said. “At the end of the night, Karen said, ‘before I came tonight, I decided what to give, but after hearing Jeanie, I’ve changed my mind and I’m doing more.”

Wagner shared the story “because for almost 25 years Karen has been doing more. Every time she sees that there is a need in this community, she’s stepped up.” She offered her personal thanks because they started the journey together and Wagner always remembered the impact of Jeannie Goykhberg’s story.

She started by thanking the Board members, past and current, noting that no organization like the JCL would be successful without volunteers who spend their time and give of themselves. She also said, “we have incredible staff, everyone from Paula [DeWeese], who joined us in 1978 to Norma Cahen … who is our new Early Learning Early Childhood director, who joined us in February. … I am confident that you’re just going to keep seeing things grow and blossom really because of our dedicated staff.”

She said she looks forward to working with Jay Klempner, the incoming Board Chair.

Wagner stressed the importance of working together in partnership with JFCS, the congregations, JHFE, the schools and the entire community because we are all stronger when we support one another and come together.

Looking around the room, she was filled with memories of things she experienced at the JCC and at camp and with family and said she looks forward to helping people find their Jewish memories and create their Jewish dreams.

Kaplan thanked Stuart Goldberg and Doug Gordon, who completed their terms, for their service.

(see full photo gallery below) When Rabbi Gaylia Rooks delivered the invocation at the 2015 Annual Meeting of the Jewish Community of Louisville on Sunday, June 14, at the JCC, she set the tone for the gathering, congratulating the award …

When you walk into the JCC and turn your head to look into the Patio Gallery, don’t be surprised if your mouth starts to water as your eyes take in a baker’s dozen of tantalizing desserts that pop off Frank …