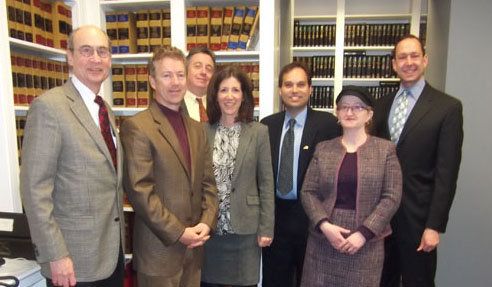 One of the important tasks the Jewish Community Relations Council performs is building bridges between the Jewish community and others – political leaders, government organizations, schools, other faith groups, other non-profits, etc.

On Friday, January 18, Jewish Community of Louisville CEO Stu Silberman, Immediate Past JCL Board Chair Ed Weinberg and several members of the JCRC, including Director Matt Goldberg, Chair Ayala Golding and JCRC member Beth Salamon, traveled to Bowling Green, KY, where they opened the conversation with Senator Rand Paul in his office at the junior senator’s invitation.

Sen. Paul, who had just returned from a visit to Israel and the Palestinian Authority, was eager to share his experiences with the group. He spoke about his meetings with Israeli Prime Minister Benjamin Netanyahu and President Shimon Peres, and Palestinian President Mahmoud Abbas and others.

The trip also afforded the senator and his family the opportunity to do some touring, visiting popular sites including Masada and the Dead Sea. He also talked about his trip to the Golan and how his journey from Jerusalem to the north took more than seven hours (normally it is two) due to the heavy rains and snow that washed out many of the roads. “We called it the tour of plagues,” he joked.

Silberman asked what surprised Paul the most during his visit, to which he responded, “Having a meeting with Mahmoud Abbas and then driving 20 minutes to meet with Benjamin Netanyahu.”

Paul’s suggestions for improving relations between the Israelis and the Palestinians focused on economic development for both sides. He said encouraging Israel to reduce its dependence on U.S. military aid gradually over a prolonged period, and helping the Palestinians develop trade with their neighbors, including the possibility of opening a port in Gaza, which Israel would jointly run with them for an extended period of time, were examples of the financial security necessary to achieve stability. He said the U.S. should not force the hand of either side, and should be looked upon as a resource to be invited into the dialogue.

The meeting with Sen. Paul also gave the group the opportunity to acquaint the legislator with the Jewish community.

Silberman provided a brief overview of the organized Jewish community, starting with the JCL’s national parent organizations, the Jewish Federations of North America and the Jewish Community Center Association, and moving to the Louisville Jewish community. When Silberman spoke about the Federation and JCC, Paul interjected, “I learned to swim at the Houston JCC.”

Goldberg and Golding spoke about the JCRC’s role in advocacy, interfaith relations, and social action. Salamon focused on Jewish Family and Career Services agency and National Council of Jewish Women, and Weinberg discussed the diversity of the Jewish community. Silberman spoke about the strength of Louisville’s five Jewish congregations representing the three major denominations, as well as the Jewish community present in Lexington.

Goldberg and Golding also talked about some of the Jewish community’s organized disaster relief efforts, including last year’s devastating tornado in Henryville.

Paul was pleased to hear that Louisville’s Jewish agencies and its Jewish community serve a large client base that includes people from all faiths.

The meeting, which lasted approximately 30 minutes, was made possible due to the “polite persistence of Stu Silberman” according to Paul’s Deputy State Director Rachel Nave McCubbin. Silberman began efforts for the introductory meeting with the Jewish community nearly a year ago.

The Senator agreed to meet with the JCL again and McCubbin said they would look for an opportunity for the next meeting to take place at the Louisville JCC.

[by Bob Tiell] Career Services Director Jewish Family and Career Services Mark is in his early 50s, married, has kids in college and must support his family. He has had a long, successful career in mass media. However, Mark was …

January 20 – Reality TV In Real Life! 3-5 Grade Overnight Drop off: Sunday at 6 p.m. Experience the JCC’s own Amazing Race, Top Chef, We’ve Got Talent, and more during this fun overnight! Don’t miss out on friendly …