The J will host Jeffrey Yoskowitz, an author, public speaker and advocate for innovative approaches to old world Jewish foods, for a cooking demonstration and book signing on Wednesday, March 1 at 7:30 p.m. 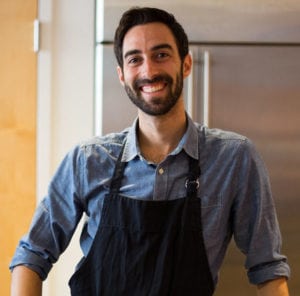 Yoskowitz and his cooking partner, Liz Alpern, have been cooking and selling sustainably sourced, artisanal gefilte fish and other traditional Eastern European Jewish foods since they opened their business, the Gefilteria, in New York City in 2012. Last year, their cookbook The Gefilte Manifesto, which makes a passionate case for making gourmet Jewish food at home rather than buying jars or mixes, was a finalist for the National Jewish Book Award.

Yoskowitz will lead a live cooking demonstration during which he will talk about how he began cooking Ashkenazi cuisine and why he thinks it is important for others to do so as well. Following the demonstration, there will be samples of a variety of recipes from The Gefilte Manifesto—including homemade gefilte fish—available for tasting. Copies of the cookbook will be available for purchasing and signing.

Many see Yoskowitz and Alpern’s work as part of a larger trend focusing on homemade and gourmet foods. Sasha Chack, who owns the Louisville-based Izzy’s Kosher Catering, notes that younger Jews in particular “are reclaiming Jewish and kosher food—the flavors and customs of their ancestors—as their own in the 21st century.” He believes that community support for a Jewish food movement will help “engage and foster growth in the Jewish community.”
Amy Green, who met Yoskowitz at the Hazon Jewish Food Conference in December and attended his presentation there, says she is “excited for the Louisville community to experience such a fun and charismatic presenter. Jeffrey’s food is out-of-this-world delicious!”

The event, organized by The J’s JOFEE (Jewish Outdoor, Food and Environmental Education) Program with assistance from the Jewish Book Council, will take place in the Patio Gallery at The J on Wednesday, March 1 from 7:30-9 p.m. and costs $15, $10 for The J members. Participants can register at www.jewishlouisville.org/gefilte.

Holding hands, praying for peace, parading in frigid temperatures, more than 50 of Louisville’s faith-based leaders, including several Jews, gathered at the Louisville Islamic Center on Friday, February 3 — the Muslim sabbath — to form a “circle of love” …