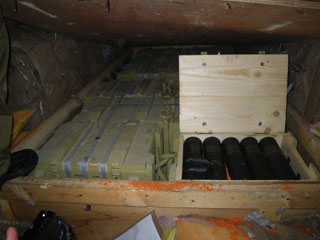 JERUSALEM, March 15, 2011 (JTA) – Israel’s Navy intercepted a ship bound for Egypt that the Israeli military said was smuggling weapons for use by terror organizations in the Gaza Strip.

The Liberia-flagged cargo ship Victoria was seized Tuesday in the Mediterranean Sea 200 miles west of Israel.

“The various weaponry on board the vessel was intended for the use of terror organizations operating in the Gaza Strip,” the Israel Defense Forces said in a statement.

There were “tons” of concealed weapons, Haaretz reported, citing the IDF. The crew did not appear to be aware of the weapons stash, according to reports.

The German-owned ship had left from Turkey’s Mersin port and was headed for Egypt’s Alexandria port; it originated in Syria. Turkey is not tied to the incident, the IDF said.


The Navy brought the ship in to Israel’s port at Ashdod for further inspection, and there was no resistance from the crew, according to the IDF.

Prime Minister Benjamin Netanyahu, commenting on the ship’s seizure during a visit to Israel’s South, said he approved of the Navy’s interception of the Victoria.

“We had a solid basis that on board the ship was weaponry destined for use against Israel,” he said. “Considerable weaponry, which was destined for terrorist forces in the heart of Gaza, was found on board the vessel. The operation was carried out at sea in accordance with all international rules. The weaponry originated in Iran, which is trying to arm the Gaza Strip.”

Israel has seized ships carrying weapons to Gaza in the past. In 2003, the Israeli military seized the Karine A, which was carrying 50 tons of missiles, mortars, rifles and ammunition to the Gaza Strip.