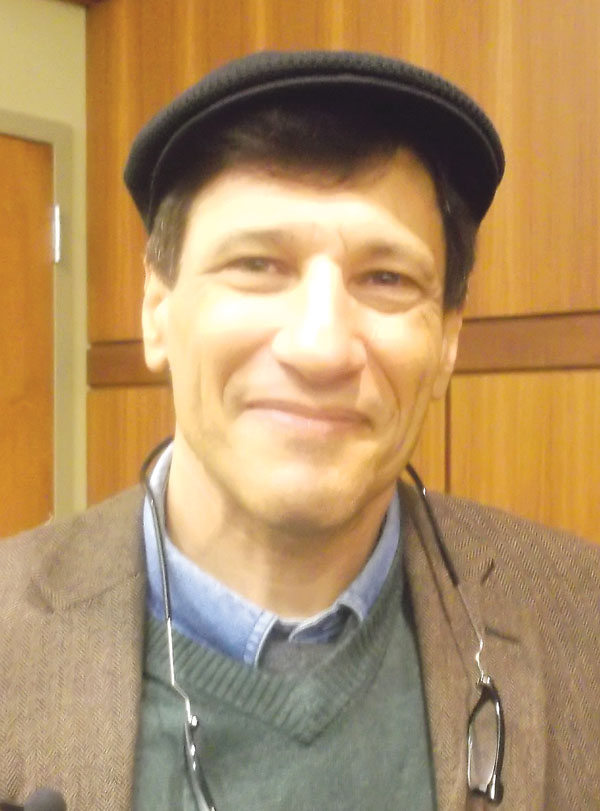 Shortly after graduating from Swarthmore College in Pennsylvania, Noah Efron volunteered for the Israeli Army. It was a move to redefine himself as not just “another American Jew destined to be professor of something somewhere.” He chose the Israeli Army as a place where he could reshape himself while reshaping the world around him.

In short order, Israel was hip-deep in the 1982 Lebanon War, and Efron was trying to figure out what he’d been thinking.

Three decades later, he is a “professor of something somewhere” – specifically, Bar Ilan University, as the founding chair of the program in Science, Technology & Society – and he is hip-deep in changes taking place in Israeli politics and culture.

On Thursday evening, October 18, Efron spoke to a small but engaged audience at the University of Louisville. He said that over the years, he has gone from being an idealistic college graduate to a thoroughly acculturated middle-aged man, abandoning hope that anything will ever change and perfecting his “Tel Aviv sigh … equal parts exasperation, desperation and resignation.”

He presented statistics to emphasize the need for change. Twenty-five years ago, the gap between rich and poor in Israel was one of the lowest in developed nations; now it is the fifth highest among the 34 member nations of the Organization for Economic Co-operation and Development (OECD). One in four Israelis now lives below the poverty line (the OECD average is 11 percent), and one in three children lives in poverty. Huge cuts have been made in funding for universities and other schools, hospitals and social services. At the same time, Israel’s economy has grown rapidly, as has the number of Israeli millionaires. It’s a familiar story.

Efron then turned to events that demonstrate things can and do change, often for the better, and to the shift he perceives toward a culture where social justice is valued above individual success.

Many examples he cited centered on the protests of the summer of 2011, which began when a group of young professionals realized they had essentially been priced out of the Tel Aviv housing market. In response, they pitched tents in Rothschild Boulevard, just opposite the National Theater and the Israel Philharmonic Orchestra. From there, the movement expanded to other cities and extended to young parents protesting the high cost of child care, as well as others raising concerns about cuts in funds for schools and medical care.

Efron also discussed his own experiences as an educator, a candidate for the Tel Aviv city council and an Israeli citizen. He recounted some of the more painful memories from the early days of modern Israel, referring to suffering and tragedy as a “zero-sum affair,” in which many felt that to acknowledge the suffering or tragedy of Palestinians was to negate that of Jews – hence Golda Meir’s remark that “there is no such thing as a Palestinian people… It’s not as if we came and threw them out.” He acknowledged that at the higher levels of government, some of the old thinking still exists.

He contrasted that thinking with ordinary citizens’ ideas, plans, and actions to make life better for everyone: rehabbing old bomb shelters into art centers, bringing Arab children from Jaffa and Jewish children from Tel Aviv together to get to know each other, extending medical care to refugees from Eritrea and the Sudan, supplying food to the poor (in secret, so they won’t be embarrassed), and more.

The key to change, he said, is in taking apart the slogan that came to encapsulate the 2011 protests: “The People Demand Social Justice.” Much energy was spent trying to define “social justice.” The government ordered studies, economists and philosophers gave interviews, rabbis described the ancient roots of the concept. Less energy went into defining “the people” who made the demand.

Efron sees a move away from an “us vs. them” society in everyday Israeli life. He sees signs that the “we” of 2012 is big enough to include everyone. One of the more telling statements pointing to this shift is that these days, more people aspire to do good for others than to have material wealth for themselves.

As has happened here in the U.S., the tent cities of last year’s protests have disappeared. But unlike the deliberately agendaless “Occupy Wall Street” actions, Israeli citizens chose important points and pushed. Young people who found their political voices in last summer’s tent cities are now becoming involved in government, actively working to create change from the top down. Since the protests, Israel has implemented legislation mandating free day care for children from the age of three – not a small accomplishment.

Everyday people feel empowered to take action on their own and to recruit friends and neighbors to help. Israelis in their 20’s and 30’s have established collective communities in poor neighborhoods, where they volunteer in schools, set up community centers and computer labs, and do what they can to help make life better for those around them. Young people who could be working in high-tech jobs are instead spending their time and energy tutoring underprivileged children. Efron’s wife, an OB-GYN, sets aside one day a week to see only Somalian and Eritrean refugee women, who otherwise would be inclined not to seek health care.

Among those Efron talks to, the prevailing attitude these days is that “the people” who demand justice are everyone – rich and poor, Arab and Israeli, Orthodox and Reform, and everyone between. Old barriers, real and perceived, are not just crumbling, but being dismantled by people who are willing to work for justice. People are less resigned to the status quo; they want a better life for everyone, not just themselves.

Modern Israel is a young country with its roots in ancient truths. From the perspective of Noah Efron, the Israeli people are beginning to move collectively toward fulfilling some of those truths.

Earlier in the day, Efron delivered a science related talk, “Nature: They Ain’t Making It Like They Used To,” during which he explored how society has progressed from a world in which the distinctions between nature and artifice were so clear that thinkers like Aristotle regarded nature as a guide and the best government as “natural government,” to today where the line has become so blurred that genetic manipulation creates things that never existed before, and those things might have more desirable characteristics than things that were not subject to manipulation.

He also discussed how science manipulated by technology can have unintended effects. For example, when Israel drained the marshland of the Hula Valley it got rid of problems like malaria-infested mosquitos, but migratory birds lost a refuge, and, Efron contends, that led to the extinction of some species.

Today, he concluded, we have found bringing nature under human control is liberatory, but we must now ask the question, have our efforts gone too far?

Efron, senior fellow at the Israeli political think tank, Shaharit, is a former Tel Aviv-Jaffa City Council member who serves on the Committee on Genetically Modified Organisms for the country’s Ministry of Agriculture. He teaches at Bar Ilan University, where he founded a graduate program in science, technology and society. His books include Real Jews: Secular Versus Ultra-Orthodox, and the Struggle for Jewish Identity in Israel and Judaism and Science: An Historical Introduction.

Efron’s lectures were sponsored by the Jewish Community of Louisville, Jewish Studies Committee of U of L’s Humanities Division, Naamani Memorial Lecture Committee, the Social Change Minor and the College of Arts and Sciences’ International, Diversity and Outreach Programs Office.

You already work out at the JCC, now you can complete your wellness program and achieve all of your weight loss goals with Weight Watchers. The FREE, Initial Informational and Registration meeting is Tuesday, November 13, from 7:15 – 8 …

When Irv Lipetz died at age 99 on September 25, the Louisville Jewish community lost a true leader who devoted his life to the pursuit of justice and was beloved for his ready smile and sense of humor. Born in …