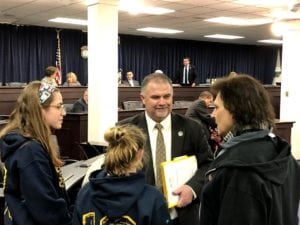 Rep. John Carney, the prime sponsor of the Holocaust Education bill, meets with Fred Whitaker and students from St. Francis of Assisi School prior to Thursday’s vote on the act by the Senate Committee on Education. (Community photo by Lee Chottiner)

FRANKFORT – Without an ounce of drama, the Kentucky Senate Committee on Education unanimously passed the Ann Klein and Fred Gross Holocaust Education Act Thursday, sending the bill to the Senate floor and moving the state closer than ever to mandatory Holocaust and genocide education.
Drama or no drama, though, Fred Whitaker, a science and religion teacher of Holocaust studies at St. Francis of Assisi School, who has spent 13 years lobbying for statewide Holocaust education, said he and his students will not let up until the bill is passed and signed by the governor.
He brought five eighth graders to Frankfort Thursday, two of whom delivered remarks to the committee. Meanwhile, other St. Francis students and parents are working the phones and social media, writing letters and emailing senators in what amounts to a political full-court press to pass the bill.
“Until the final vote is taken, and this is law, we will not stop,” Whitaker said.
Though the bill passed without opposition, it did not pass with consent, meaning senators may speak on floor about the measure.
“Members can rise and make speeches, Whitaker said. “We are hoping they’re excited to voice support. Of course, that also raises the opportunity to voice opposition,” Whitaker said. “It’s imperative that all of us who care call, write and inform our neighbors.”
The act, styled House Bill 128, would require every public middle and high school to teach the Holocaust and other acts of genocide as defined by the United Nations Convention on the Prevention and Punishment of the Crime of Genocide.
A curriculum already exists thanks to an earlier law.
If the bill becomes law, Kentucky will join Florida, Illinois, New Jersey, California, Michigan, Indiana, New York and Rhode Island as states that require some degree of Holocaust and genocide education.
Gross, one of the namesakes of the bill, was on hand for the vote. He called it a “history-making moment.”
“It’s the teachers of Kentucky who initially gave me voice to tell my story,” the 81-year-old Gross told the committee, “and I am grateful.”
No date for a Senate vote was given, but Sen. Max Wise, chair of education committee, said he hoped, given that none of his members opposed the measure, it would “pass gracefully to the floor.”
Rep. John Carney, R-Campbellsville, the prime sponsor of the bill, told the committee, “We cannot repeat the mistakes of the Holocaust. If we do, we’re doomed to failure.”
Himself a history teacher, Carney told Community how he has seen the positive impact Holocaust education has on his students.
“I think it was one of the more knowledgeable and life-building lessons they brought out of my classroom,” he said.
St. Francis students Kaitlyn Calvery and Rosemary Peters echoed that sentiment when they addressed the committee.
“The Holocaust calls us into the most profound wisdom humanity has to teach,” Calvery said. “It summons us, with unique power, into making this wisdom our own and into understanding that we aren’t too young to create powerful moments, which bring healing, compassion and hope into our world.”
Students who study the Holocaust, Peters added, “will emerge with their moral compasses more magnetized, pointing more powerfully to compassion and justice.”