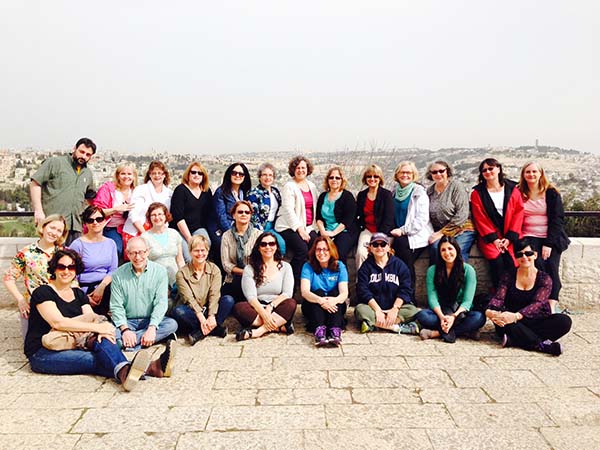 To deepen the connection between educational professionals in North America and the land of Israel, JCC of Louisville Early Childhood Assistant Director Angie Hiland attended JCC Association’s Early Childhood Education Leadership Seminar in Israel from March 9-20. The program was designed to enhance one of the essential core elements of Sheva – JCCs of North America Early Learning Framework: “Israel as the Story of the Jewish People,” and included 23 participants from 20 JCCs in the United States.

The trip was designed to be a leadership study seminar, giving participants a hands-on opportunity to study with scholars in Israel in early childhood education and development, crisis management, children’s literature, spiritual development of children and more.

Although participants were able to enjoy the magnificent sights and sounds of the country, each day was designed to be the foundation for continuing work in connecting our North American JCC early childhood centers to the state of Israel in meaningful and long-lasting ways.

This was Hiland’s first trip to Israel, and she said, “We visited all over – Tel Aviv, the Golan Heights, Jerusalem – and we stayed at Kibbutz Nir David. We visited the old city in Jerusalem, went to Caesarea and visited the ancient ruins.

“While we were in the Golan Heights,” she added, “we learned about the water supply in Israel and how that was a big part of the conflict between Israel and Jordan.”

This was not just a sightseeing trip. Hiland explained that wherever they went, the trip leaders “took all of the things we learned and translated them into how they teach preschoolers about the country as a whole.”

At one of the ganim (kindergartens) they visited, Hiland explained, “they had an archeological dig as part of the curriculum base. … they dug up a huge area and stocked it with things for the children to dig up, sift, rinse and discover, tying it to the digs all over Israel.

“In Israel,” she added, “there is always something underneath what you see. … Israel is layers of people and cultures that have all come together.”

At that preschools, the children took the tiles they found “and put them in a sorting areas,” Hiland observed. “Then they made mosaics on the walls. The activities supported the children’s need to explore and fostered each child as an individual.”

While participants were able to visit the national park and excavations at Caesarea on the coast between Tel Aviv and Haifa, they also spent time at Kibbutz Sde Eliyahu, where they learned about the “junkyard playground.” This outdoor play area was invented at this kibbutz in the 1940’s and participants studied with one of the primary researchers and developers of this playground philosophy, which, as an extension of the classroom, allows children to construct knowledge and invent with every-day, castoff objects.

Hiland was very impressed with this playground. “Anything you might have thrown out is repurposed and reused,” she said, “from a broken lawn mower to old wrought iron table. As Americans, we had to look past the rust and junk and to see the creativity these children exhibit with those things. They’re developing play zones that explore a greater world.”

“For older children,” she continued, “there is a whole area of junk, divided into zones. One group had taken items and built a hospital and ambulance to transport patients. They had created a whole story over the course of a week or two. Then they have tear-down day to return items and the next week, they begin again.

“The children can request to keep special items,” Hiland noted.

Another important aspect of the program, Hiland reported, is that “within the yard, they don’t have conflict, because they are teaching children to work as a community and each community has maximum number of people. No one’s ideas are not accepted, although they are often tweaked. Every idea is incorporated within the space.

“This was one one of my favorite things,” she said. “It’s an experience and tangible thing I can bring back. We can bring materials and tools for our children – without the rust – and use them in appropriate way for Americans.

Throughout the leadership seminar, participants visited matnas (community centers) and preschool programs, getting ideas about the similarities and differences between their own JCC programs and Israeli ones. Visits included the YMCA Peace preschool for Jewish, Christian and Arab children, an Orthodox Jewish early childhood program and a Reform movement preschool.

“It felt cohesive and good” to visit the YMCA Gan, Hiland said. “There was an Arabic-speaking teacher and a Hebrew-speaking teacher in every classroom. All the children celebrate all the holidays, including the Jewish holidays. The Muslim children dame in the fanciest costumes” because there is nothing like Purim in their tradition.

Participants focused on the spiritual life of the child, visited an interactive Bible museum, and visited Beit Issie Shapiro, a center for children with special needs, to see Israel’s first accessible and inclusive playground. The 11-day trip included the festive holiday of Purim, as well as Shabbat, allowing the group to experience the day of rest in the Jewish homeland. And, of course, no trip would be complete without some sightseeing through the Old City of Jerusalem.

Hiland also enjoyed celebrating Purim in Jerusalem. “Purim was everywhere,” she said, “in all public spaces. It just took over – we don’t have that here. It was a cross between Mardi Gras and Halloween and everyone participates. Everyone was dressed up, from the youngest children to oldest adults. We went to the Megillah reading in a Reform synagogue. It was an experience I’ve never had before.”

To help the teachers bring what they learned back to their classrooms, Hiland explained, they brought Sammy the Spider along on the trip. “‘Sammy the Spider Goes to Israel’ is a PJ Library book,” she said, and the teachers took pictures with him as they traveled. He went everywhere they did. “He ate his way through Israel and was number 26 on the bus,” she said.

“There is another thing that struck me about Israel that Americans don’t realize,” she added. “People think Israel is dangerous. What I experienced was far from that. Their fears come from war situations, which seem to be more limited than ever before.

“We saw a parent reading while pushing a stroller and toddlers just followed behind,” she said. “Children go to and from school on buses and go home alone at very young age. This is much safer than in America. Even in the preschools, children come and go to the restroom and the play space. It is not regulated same way we are and children are very independent from very early age. This was consistent in all ganim we visited.”

The leadership seminar was organized by JCC Association as a way to foster greater understanding and connection for the early childhood directors and education programmers to Israel. This will allow them to better integrate Israel into their early childhood programs, as well as deepen their own connection to the country.

Editor’s note: The local portion of this story was written by Shiela Steinman Wallace. The framework was a press release provided by JCCA.

Yochanan Kishon is a master photographer and artist who lives in Nahariya and teaches at Sulam Tzor Regional High School. On April 7, he stopped in Louisville with the Partnership 2Gether program to present a pair of workshops – one …

March 26, 2014 – When I took up Rabbi Stanley Miles’ offer to join him on the Partnership 2Gether (P2G) trip in February as a representative of Louisville’s Beit Seder Yachad (LSBY), the Judaic/Hebrew school where we both teach, I …

On April 6, a small group gathered at Jewish Family & Career Services to participate in a Partnership 2Gether discussion of the book Our Holocaust by Amir Gutfreund. They joined participants from Toledo, OH; Des Moines, IA; and Israel via …