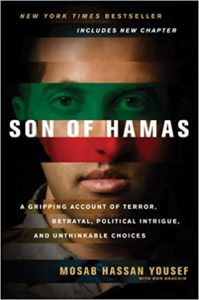 Mosab Hassan Yousef, seen here on the cover of his 2010 book, “Son of Hamas,” believes Jews should be allowed to worship on the Temple Mount.

The son of a founder of the terrorist organization Hamas said Jews should be allowed to worship on the Temple Mount in Jerusalem – in their own worship space.
Speaking on the Sunday Night Live program on Zoom sponsored by Adath Jeshurun, Mosab Hassan Yousef acknowledged that many Jews consider what he was saying to be “very dangerous,” but he said he didn’t care.
There is room enough on the mount for all three of the major monotheistic religions, he said.
“The Temple Mount is huge, and it has the Christian church and the Muslim mosque,” Yousef said. “We don’t have to destroy other people’s temples, but we can add one more for the Jewish people to worship, to see the Abrahamic religions worshipping together. This is possible; it’s within our ability.”
The church he was referring to appears to have been the Church of the Holy Sepulchre, which is in the Christian Quarter of the Old City.
In a follow-up comment he emailed to Community, Yousef called his suggestion “hypothetical” and said he meant it as a “challenge [to] the current monopoly on God by all extreme views.”
He added, “If it was up to me, I don’t mind building a Jewish temple in Mecca!”
The Temple Mount is a flashpoint in Arab-Israeli politics. Israel still recognizes the Jordanian mandate over the Temple Mount – the site of the First and Second Temples – but many Orthodox Jews insist on their right to visit and worship there. Israelis are now allowed to visit but not worship.
Meanwhile, the Muslim Waqf, the authority that controls the Temple Mount – home to the Dome of the Rock and the Al Aqsa Mosque – opposes any Jewish efforts to assert control over the site.
Nevertheless, Yousef said, the Temple Mount could figure heavily into a two-state solution, which he called “very possible” with compromise by the Palestinians and a little rethinking.
He envisioned a Palestinian state on the Temple Mount similar to the Vatican in Rome – the home of the Roman Catholic Church and the world’s smallest country.
“It’s a state without borders, and it’s a very wealthy, very powerful state,” Yousef said of the Vatican. “In Jerusalem, where they have the Al-Aqsa Mosque, make it into a Vatican and you know what that means? Lots of money, lots of pilgrims.”
Meanwhile Israel could continue to exercise security over the West Bank, which Yousef described as a “defensive line” for the country, while Palestinians build their local economy.
“What do we want with borders and guns and armies?” Yousef asked. “This we don’t need.”
These were bold visions coming from a man who is considered in many quarters to be a traitor to Hamas.
Nicknamed “The Green Prince,” Yousef, 42, the son of Hamas co-founder Sheikh Hassan Yousef, grew up in Ramallah on the West Bank. He became a Shin Bet informant following his imprisonment by Israel in 1996. There, he witnessed interrogation tactics that he considered humane compared to Hamas’ methods with suspected collaborators.
He began passing information to Shin Bet following his release in 1997, which led to the exposure of many Hamas cells and the thwarting of suicide bombings. He chronicled his career in espionage in his 2010 autobiography, Son of Hamas. He has since converted to Christianity.
(Last year, Yousef’s brother, Suheib, who ran a Hamas spy operation in Turkey, also left the organization. In an interview on Israeli TV, Suheib called Hamas “corrupt” and urged his father to resign. But he distanced himself from his brother, Mosab, saying that unlike him he never betrayed the organization.)
Rabbi Rachel Sabath Beit-Halachmi of Ohavy Zion Synagogue in Lexington, who interviewed Mosab Yousef Sunday, touted his exploits, saying he led a “Palestinian James Bond life,” but Yousef waved off suggestions that he was a hero.
“For me, if I accept to be the hero, I’ll also have to accept to be the traitor,” he said. “I know who I am.”
Nevertheless, he has referred to Palestinian leaders as “con artists,” assailing some for characterizing the Palestinian experience at the hands of the Israelis as a holocaust.
“They don’t even know what a holocaust is,” Yousef said.
He also criticized efforts by Hamas leaders for demonizing Israelis to their own people.
But change is happening, Yousef said. Jihadists, who he described as “idiots” and “bottom feeders,” are financially and intellectually bankrupt, and increasingly unpopular with the Arab people.
Ironically, their fall may have been helped along by the rise of ISIS. Yousef said the ISIS vision of an Islamic state has been rejected by many Arabs, who are tired of militants in black hoods.
“Believe it or not, ISIS created an awakening in the Arab world,” he said. “Mark my words, this is a historical thing. Ishmael and Isaac are coming to work together, finally.”