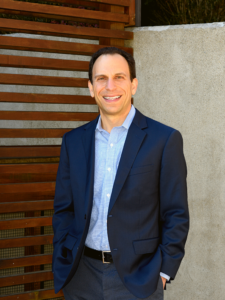 Louisville businessman Craig Greenberg, a Democrat, announced his candidacy for mayor Wednesday, entering a growing field that already includes three other candidates.
If he wins, it will mark the return of a Jewish Louisvillian to the Mayor’s office. Jerry Abramson held the position for 20 years, first as mayor of the old City of Louisville then of the consolidated Louisville Metro.
“Now is the time to build a Louisville that works for everyone,” Greenberg said in a prepared statement. “Together, we’ll build a Louisville that provides opportunity to every child and that treats every resident and neighborhood with the respect they deserve.”
In his release, Greenberg cited five planks in his campaign platform:
• Restore trust in the police force and its leadership through reforms and greater accountability.
• Create good-paying jobs by focusing on growing local businesses and supporting entrepreneurs.
• Expand affordable housing by building 15,000 new units in his first term.
• Create a Louisville Department of Education to strengthen and enhance coordination among Louisville’s pre-K to college educational institutions. • Serve no more than two terms and push for a two-term limit for future mayors.
Formerly the CEO of Louisville-based 21c Museum Hotels, Greenberg currently co-owns Ohio Valley Wrestling, a local professional wrestling and entertainment company.
He also served on the Board of Trustees at the University of Louisville, chaired the March for Dimes’ March for Babies and was on the boards of the Metro United Way and Louisville Jewish Community Center.
He is a lifelong Democrat.
He and his wife Rachel, a former public school teacher at Wheatley Elementary School, have two teenage sons.

By Lee Chottiner Community Editor The story rising from the ashes of the Louisville Chabad House is not so much that fire destroyed the building, but that a community closed ranks to help. Since flames burned through the synagogue on …

By Lee Chottiner Community Editor After two years of work, a browsable, searchable platform for past issues of Community is ready to be debuted online. The Filson Historical Society and the Jewish Community of Louisville will host a virtual program …