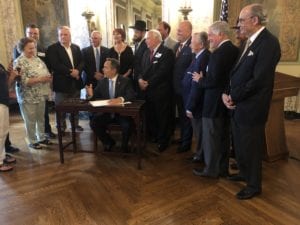 The signing ceremony at the Capitol for the Kentucky anti-BDS law. (photo provided by Frank Weisberg)

Gov. Matt Bevin, this week, signed a bill that prohibits the commonwealth from doing business with significant contractors that engage in boycotts of the State of Israel.
The signing, which took place Tuesday, Aug. 27, at the Capitol in Frankfort, was largely ceremonial since the bill had been passed in the last regular legislative session and had already become law. Still, it reflects the state’s official opposition to the movement to boycott Israel known as Boycott Divestment Sanctions (BDS).
Mainstream Jewish organizations, including the Jewish Community Relations Council (JCRC) and the Jewish Community of Louisville (JCL), say the movement, which claims to be an effort to force changes in Israel’s treatment of the Palestinians, is really a veiled ant-Semitic effort to cripple the Jewish state.
In a statement, Matt Goldberg, director of the Jewish Community Relations Council, said the Jewish Community of Louisville is “grateful for the overwhelming bi-partisan support” for the new law. “This bill prohibits the state of Kentucky from contracting with any corporation that boycotts a country that does business with it, including Israel, Goldberg said in the statement.
“We are thankful for the many Kentucky citizens, both Jewish and non-Jewish, who made this possible.”
Frank Weisberg, Leon Wahba and rabbis from Chabad of the Bluegrass and Kentucky were on hand for the signing, as were representatives from Christians United for Israel (CUFI), U.S. Rep. Andy Barr and state Senate President Robert Stivers.
“Everything that was said was favorable to Israel and World Jewry,” Wahba said. “Our friends from CUFI have demonstrated to us that they can be counted on to help us advocate for Israel and against anti-Semitism.”
The law affects contractors with at least five employees and doing business worth more than $100,000.
Kentucky is now one of 26 states that have passed legislation opposing the BDS movement.