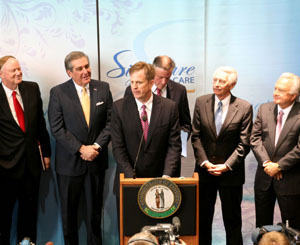 The move will initially create 96 new jobs in the Commonwealth, growing to more than 120 new Kentucky jobs with an average annual wage exceeding $75,000, exclusive of benefits. The new headquarters location will also result in a nearly $5.4 million investment.

“Kentucky is proud to once again attract an industry-leading headquarters operation, creating more than 120 new high-paying, quality jobs,” said Gov. Beshear. “The location of Signature HealthCARE’s national headquarters helps to solidify Louisville as a leader in the aging care industry and is a testament to the business climate and quality of life Kentucky offers.”
“The leaders at Signature HealthCARE are running what is one of the most innovative and compassionate senior care companies in America,” said Mayor Abramson. “The fact that they’ve chosen Louisville for their headquarters adds yet another company to the city’s growing senior care industry.”

Signature HealthCARE, one of the fastest growing privately held companies in the United States, operates 66 long-term healthcare facilities in seven southeastern states and employs nearly 11,000 people. Signature owns and operates Four Courts at Cherokee Park. The company will acquire a 65,630 square-foot facility located at 12201 Bluegrass Parkway in Louisville, which will serve as its national headquarters including corporate management and facility operational support functions.

“Signature HealthCARE is a unique organization that believes it can radically transform long-term care in this country through its key organizational pillars: intra-preneurship, learning and spirituality,” said E. Joseph Steier III, president & CEO of Signature HealthCARE.  “Louisville, Kentucky will provide a great central location with one of the best quality of life environments for families, rich university partnerships and an amazing talent pool to foster aggressive growth. A key differentiator for the decision was the true collaborative effort of the economic development teams at both the state and local levels. We welcome the incentive package as support to facilitate our move from south Florida. Our team is truly excited to call Louisville our permanent home.”

Gov. Beshear also announced Signature HealthCare’s partnership with Nucleus, the University of Louisville’s driving force behind a life sciences hub in downtown Louisville, to create the International Center for Long Term Care Innovation.  As the country’s first long-term care innovation center, the center will house and assist in the development of early-stage health technology and services companies seeking to bring new ideas to the aging care industry.

“The University of Louisville has several world class faculty and research programs that are engaged in aging care research and development. Our researchers are on the forefront in senior-focused health care, gerontology, geriatric medicine and aging,” said Dr. James Ramsey, president of the University of Louisville. “As the state’s life sciences and innovation center, Nucleus has everything it needs to establish a center that will be a core component of this community-wide effort.”

The location of Signature HealthCARE helps to further enhance Louisville’s economic development strategy to develop an aging care industry cluster in the region.  Louisville, which is at the center of the growing aging care industry in the United States, is home to nearly 4,000 industry professionals producing over $14 billion in revenue.  Eight of the top 20 employers in the Louisville metro area are health-related businesses.

The Kentucky Economic Development Finance Authority preliminarily approved Signature HealthCARE for tax incentives up to $4 million through the Kentucky Business Investment program.  The incentives can be earned over a 10-year period through corporate income tax credits and wage assessments.  The maximum annual amount approved to be earned by Signature HealthCARE is $400,000.