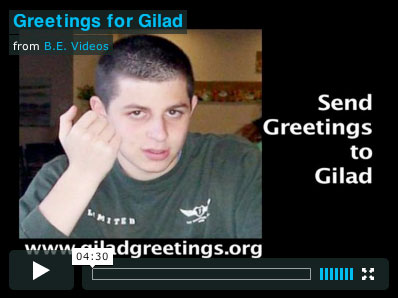 Gilad Shalit was kidnapped four long years ago and has been kept in secret isolation, causing pain and torment to his parents and family.

To the hostage, time itself is torture. It becomes an enemy. Filled with uncertainty, his time is different from ours. His waiting is not like ours. His minutes are longer than ours.

When will his Hamas captors realize that even terrorism must have limits? When will they allow the International Red Cross to visit him in his prison cell or underground hole? When will the civilized world raise its voice and demand Shalit’s release? When will NGOs make their outrage known? When will all good, decent and sensitive men and women mobilize their energy to put an end to this human scandal?

They must realize that their silence only helps the jailor, never the prisoner.

What is at stake is our honor and our humanity.

Cpl. Gilad Shalit was kidnapped from within Israeli territory on June 25, 2006, as part of an unprovoked and well-planned attack by Hamas terrorists. During the course of the attack, two IDF soldiers were killed and five others were wounded. In violation of international law, Gilad Shalit has been held in total isolation with no access to the International Red Cross or other humanitarian bodies for more than 1,500 days.

Since capturing Gilad, Hamas has provided only two indications that he is alive – a recorded voice message from Gilad released on June 25, 2007, and a video released on October 2, 2009. Click below to see images including a video ‘Greetings for Gilad‘.

While Israel has increased the flow of goods and materials to the people of Gaza, Gilad remains captive there. He alone recieves no humanitarian aid, no communication and is deprived of any freedom of rights.