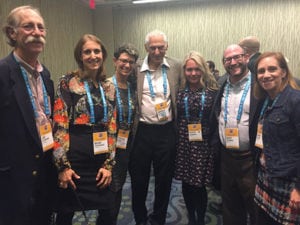 What do all these people have in common? Besides being Jewish leaders, we all attended the Jewish Federation of North America’s General Assembly in Washington, D.C. last month.

And since the power of a conference is not in attending, but in bringing new ideas home and putting them to use, I want to share with you some insights and take-aways we gained at the General Assembly.

We gathered in Washington, D.C. less than a week after the presidential election. Naturally, many speakers at the GA addressed the election outcome, and how Jewish organizations should interact with the new administration. Hunter Weinberg, attending her first GA, enjoyed hearing from pundits and campaign workers as they unpacked the election. There was consensus that Jewish organizations had to push their agendas forward over the next four years, and to do that, they would need to engage with President-Elect Donald Trump and his appointees. As JCPA President David Bernstein noted: “Trump cannot be treyf to us.”

At the same time, speakers addressed the need to draw attention to rising anti-Semitism and push our elected leaders to take action against it. They emphasized this had to start at the top, with President-Elect Trump. Expect all these conversations to impact the Jewish community’s advocacy approach over the coming years.

Scott Weinberg, who was attending the GA as a Joseph J. Kaplan Young Leadership Award winner, was motivated by a panel discussion on “Next Generation Jewish Philanthropy.” The panel examined how communities can make philanthropic giving a tradition passed down from generation to generation, and included ideas on empowering the next generation of Jewish families to give back. Look for some of these ideas to be used here in Louisville, particularly as we embark on the Life and Legacy program.

Yavilah McCoy, an African-American Jew and founder of a Jewish diversity non-profit, spoke about civil rights and how we can move this agenda forward. She emphasized that real change is made through building relationships, not writing letters and throwing barbs. This reinforces the work our JCRC (Jewish Community Relations Council) and others are doing to build relationships and advocate for Jewish causes.

Scott and I also attended a session on outreach to young families. It was a great mix of provocative conversation (how can we create Jewish spaces that meet the needs of today’s new parents?) and fun ideas (ice cream socials have biblical roots!). Watch for some of these ideas to be put to good use by our synagogues and the JCL (Jewish Community of Louisville).

I attended a session on using storytelling to combat the Boycott, Divestment and Sanctions movement against Israel. In front of a packed room, I stood up and had 90 seconds to tell a story that would move someone to feel differently about boycotting Israel. Too often, we focus exclusively on facts, and forget that each of us has a personal narrative that supports Israel’s right to exist. Ask me about mine – and I look forward to hearing yours.

The Louisville delegation also attended the PJ Library reception hosted by Harold Grinspoon. PJ Library has grown over the years from a book sharing program to a thriving connecter for Jewish families. It is an important program in Louisville that provides high quality Jewish books and CDs to families with young children. It recently expanded to engage older children through PJ Our Way, and Louisville even has a young participant, 10-year-old David Kaplan, serving on the PJ Our Way Design Team.

The General Assembly was an inspiring three days in Washington. But now the real work begins: the work of putting these new ideas into action. I hope you’ll join us as we work to strengthen Jewish Louisville and our relationship with partners, other faiths, government leaders, and each other.

More than 60 people turned up for the annual Holiday and New Year’s Party, hosted by the Senior Department on Sunday, December 18. Brunch was hosted by Gerry Burns and entertainment was provided by Grand Slam.

OMAHA, NE — Berkshire Hathaway Chairman and CEO Warren Buffett welcomed 43 U.S. Israel bond investors to Omaha on recently, each of whom made a minimum $1 million new investment to participate in an exclusive evening with the famed “oracle …