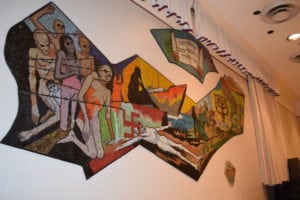 Dr. Harold Berg had a favorite saying: “Life is short, but art is long.”

In other words, long after the artist passes away, his art, and its messages, live on.

So it’s no wonder why Berg, an ardent Zionist, agreed to create a mosaic mural depicting the horrors of the Holocaust and the elation of the birth of Israel – the same mural that hangs today in the Linker Auditorium of The J. 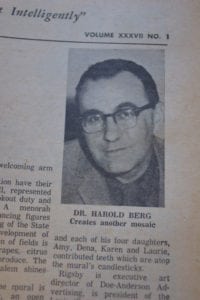 Dr. Harold Berg in a photo reprinted by the Kentucky Jewish Post and Opinion.

“It starts in a terrible place, but it ends with the creation of the State of Israel,” said Karen Berg, daughter of the late surgeon and mosaic maker. “The Jewish identity was not destroyed; it was not lost.”

The 48-year-old work of art will be rededicated at the JCL Annual Awards Meeting, Thursday, June 8. At that time, a new plaque for the design will be presented.

“The mosaic was introduced to a generation who remembered the Shoah and the creation of the state of Israel and the Six-Day War in 1967,” said JCL President and CEO Sara Klein Wagner in a written statement. “We recognized that it was time to reintroduce the iconic mosaic and the story it tells.”

Formally unveiled on Oct. 12, 1969, the mural was the brainchild Joseph J. Kaplan, then president of the JCC. Kaplan asked Berg to make the mural after the JCC board OK’d the project. Berg accepted, donating his time and materials to the project.

Berg “became so enthusiastic over the idea that he described it most effectively to the attention of the JCC board of directors, which resulted in its placement on the wall where it will be in constant sight of the public,” the Kentucky Jewish Post and Opinion reported at the time.

The mural actually depicts an artistic transition from darkness to light: First, it shows emaciated victims of the Nazi death camps, then the steamer Exodus, made famous by Leon Uris’ novel of the same title, as it reaches Palestine, the silhouette of a woman watching it approach.

Finally, the mural depicts Israeli independence through scenes of a soldier planting a tree in the ground and people dancing about a menorah – grapevines in the foreground, Jerusalem as a backdrop.

The mural was unveiled two years after Israel liberated the Old City of Jerusalem in the Six-Day War, once again freeing Jews to worship at the Western Wall.

Karen Berg, whose daughter, Rachael Pass, is a rabbinic student in New York, said the artwork exhorts Jews of all generations “to be witnesses and to make sure your eyes are not closed to the lessons of history.”

Joe Rigsby, an art teacher at the JCC, assisted Berg in creating the 25-foot-long, 15-foot-high wall sculpture – made with hundreds of mosaics from Mexico and Italy. The mural, built upon 15 separate panels, took an entire summer to complete.

Shards from Masada and the Western Wall, which were purchased from the Israeli Department of Antiquities, are incorporated into its design.

The graphic Holocaust scenes in the mural have always been somewhat controversial. According to the Post and Opinion, Rigsby was apprehensive at first about how stark they would be, but he soon came around to the concept.

“It’s something too easy to forget,” he told the paper. “So, it has to be shown. The first or second generation removed from catastrophe should be reminded of what one human can do to another.”

Wagner said a curtain was installed around the mosaic in the ‘90s, which concealed the mural when drawn.

But Karen Berg said the mural should be seen by young and old alike.

“It’s too important of a story not to teach our children,” she said. “That’s what it was meant to do; that’s what we are meant to do. If we abdicate that responsibility, then we’re just allowing history to repeat itself.”

Berg came by his interest in mosaics by chance.

“The story goes he was visiting Mexico with my mother (Pearl) and another couple,” daughter Karen recalled. “They were having lunch outside on a patio overlooking a mosaic factory. He thought, ‘Wow! That looks interesting,’ and went down there and bought some tiles. That’s how it started.

That’s putting it mildly. Today, her father’s creations are on display at the U.S. embassy in Israel, the Israeli embassy in Washington and Jewish Hospital downtown.

“He has mosaics literally all over the world,” Karen Berg said.

This particular mural was unveiled with a separate mosaic plaque dedicating the work to Kaplan and bearing two biblical passages: the line from Joel given above, and these words from Exodus: “I will redeem you. I will bring you into the land.”