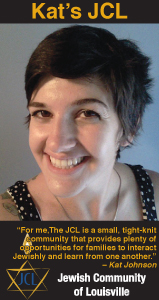 Kat Johnson grew up in Louisville’s East End and in Oldham County with little connection to the organized Jewish community.

“When I was older and became a mother,” she says, “I realized that I wanted to make Judaism a part of my children’s lives and to pass on to them our rich Jewish heritage.”

She began her journey of connection by joining the Jewish Community Center. She also reached out to Rabbi Robert Slosberg at Congregation Adath Jeshurun and to Tzivia Levin, a staff member of the Jewish Community of Louisville who is involved with young leadership programs and the Young Adult Division (YAD) of the Federation Annual Campaign.

Her involvement in the JCL became a passion. Johnson is currently chairing the YAD Picnic on August 28 and is a member of the Young Leadership Development (YLD) class as well.

“I try to create as many opportunities as I can for my children to connect with the organized Jewish community,” says the stay-at-home mom, who lives with her husband, Drew, and their family in the Highlands. She feels she has the time and energy to become involved and plans to continue seeking opportunities to do just that.

By sending their boys, William Tate and Asher Zane, to camp at the Jewish Community Center and including them in Shabbat and holiday celebrations, building a Sukkah at their home and attending events sponsored by The PJ Library, she hopes they will develop an abiding interest in all things Jewish that will sustain them for the rest of their lives.

On a personal note, after attending the JCL’s Women’s Campaign event and hearing actress Mayim Bialik discuss the “Partners in Torah” program she is a part of, Johnson was able to locate a learning partner with whom she discusses Torah over the phone on a weekly basis.

This year, she’ll be teaching fourth grade Sunday School at The Temple. She’s also planning to become more involved in the Louisville Beit Sefer Yachad (the former Louisville Hebrew School) and will spend the next year serving an internship on their board as part of her YLD training. She hopes this will just be the first step in becoming a leader in the greater Jewish community as well.