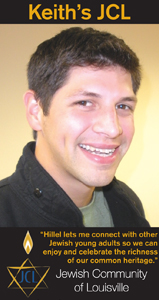 For Keith Callen, being Jewish is just part of who he is.

A St. Louis native, Callen is now studying for a degree in sports administration at the University of Louisville. When he’s not in class or studying, you can find him cheering on the Cards and leading the crowds as the Cardinal Bird mascot or at the Phi Kappa Tau fraternity. Even with this busy schedule, Hillel is an important part of his life.

Callen’s Jewish education began at the Solomon Schechter Day School in St. Louis. Although he left the Day School after the third grade, he continued his Jewish education and was an active member of the Conservative Congregation B’nai Amoona. He also spent eight summers at Camp Sabra in Lake of the Ozarks. He was active in BBYO and USY and attended Kinus, a USY convention.

In high school, he decided he wanted to spend a semester at the Alexander Muss High School in Israel. His parents said it was a great idea, but he’d have to earn half the cost of the program. He took on the challenge and reached his goal. He also took a Hebrew class and learned enough of the language so he could communicate and get around Israel, the he spent the second semester of his senior year at the Alexander Muss High School.

There were 40 people in his Alexander Muss class – half juniors and half juniors, half male and half female – from across the United States. It was a life-altering experience for Callen. “When we got there,” he recalled,” they blindfolded us when we got on the bus.” After traveling some time from the airport, they were taken off the bus one by one. On command, they removed their blindfolds and found they were on the Jerusalem overlook at sunset – an experience that set the tone for an amazing four-month journey.

“I have a strong belief in my religion,” he said. “You could put me anywhere, an I wouldn’t ever think twice about it.”

“Having Hillel on campus is good,” he continued. “I didn’t use its resources my freshman year, but when I needed to come back and felt I wasn’t as crisp on Judaism as I should be, I went to Hillel and really connected.”

Callen’s older sister, Kim, had also studied sports administration at U of L and had connected with Hillel through Peter Anik. When Keith arrived on campus, Anik connected with him. Callen even dated Anik’s daughter for a while, but now, he says, “We’re just friends.”

Callen says he plans to graduate next year, and when asked about his future, said, “I’m not picky where I adventure to. If I can get a good job, I will take it. I want it to be in college or professional sports.”
Currently, he is interning with the Louisville Lightning, a pro soccer team, where he helps with marketing and ticket sales.

“My dream,” he said is to go back to St. Louis and work with the St. Louis Cardinals. It does not have to be a big job. I’m willing to work my way up.”

His parents are Louis and Debby Callen.

Hillel is a program of the Jewish Community of Louisville. The Hillel office is in the Interfaith Center on U of L’s Belknap Campus, but the program serves students at all metroversity campuses.