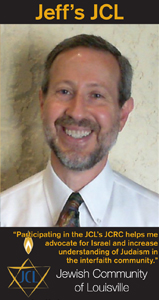 For Louisville native Jeff Slyn, Judaism is an important part of life, whether it’s attending and often leading daily minyan at Congregation Adath Jeshurun as he says kaddish for his father, Alan Slyn, participating in a Jewish Community Relations Council meeting with the Jewish Community of Louisville or relying on Jewish values as he runs his business.

He particularly enjoys participating in interfaith relations and counts on the JCRC to help others understand Judaism and the Jewish community and to disseminate factual information about Israel. “It’s important to have Jewish representation at interfaith events,” he said, “and for others to see we’re honorable, caring people, committed to charity and to helping others.”

One of his favorite ways to share Jewish traditions is as a volunteer leader in the JCRC’s Model Seder program. Each year, he goes to a different church or other non-Jewish group to introduce program participants to Jewish Passover traditions.

Much of his Jewish activity as an adult has been with Congregation Adath Jeshurun, where he is a third-generation member. He is a long time member of AJ’s Board and is AJ’s official representative on the JCRC. He’s the regular Tuesday night service leader, often leads services on other nights and locks up the building every night. One year, his regular participation earned him Minyannaire of the Year honors.

Slyn helps ensure congregants have a positive experience when they come to AJ. He has served as co-chair of the synagogue’s High Holidays Committee for three years, as well as many other committees. At the annual AJ Music Fest, he is in charge of the ushers and the box office. He ushers and helps other events as well.

For the past 15 years or so, Slyn has also participated in AJ’s Bikkur Cholim program, visiting patients at Baptist East Hospital before Shabbat with grape juice, challah and words of comfort and encouragement.

He previously served as AJ’s liaison to Keneseth Israel and co-chaired the two congregation’s joint health fair with Gracie Wishnia. He takes advantage of AJ’s adult education opportunities, and currently is working to help reorganize the synagogue’s Men’s Club.

Slyn has also been a volunteer with the JCL’s Annual Campaign, too, and one year co-chaired the Hoopla Committee with his ex-wife, BeeDee.

He understands the importance of Israel to the Jewish people and has visited the country.

Slyn enjoys hands-on volunteer work. He is a founder and past vice president of GRRAND (Golden Retriever Rescue & Adoption of Needy Dogs), has helped with the Kentucky Humane Society’s main fundraiser, and volunteers with Project Warm and at Maryhurst and Four Courts Senior Center.

Professionally, he is the owner of SLYN Systems and Peripherals, which he describes as, “Louisville’s longest running computer sales, networking and service dealer,” and has been in business since 1985. He’s a member of the Lyndon Area Business Association’s Board of Directors and will serve as the group’s vice president next year. He’s also on the Board of the Kentucky Microsoft Small Business Server Users Group, and last year chaired Light Up Lyndon.