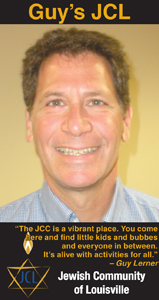 Guy Lerner did not grow up in Louisville, but his new hometown is a comfortable fit for him, and he sees many parallels to his childhood hometown, Allentown, PA.

“My grandfather founded the Jewish Community Center in Allentown,” he said, and it is very similar to the JCC in Louisville. “My mother served on the board and my aunt was the head of the board. We have a long history of going to and supporting the JCC.”

erner has heard many Louisvillians reminiscing about the time they spent at the JCC and how they grew up there. He knows their experiences mirror his own, and he appreciates that.

At the same time, he has little patience for those who lament that that JCC is not what it used to be. “It meant something to me as a kid,” he explained, “and it means something different now.

“It is the place where my entire family goes,” he explained. “The kids have their Hebrew School activities here. There are camps and other activities. It may not be the focal point of their lives the way it was in mine, but they know that this is a place where they can come and where they are welcomed.

For Lerner and his three brothers, Bob, Rich and Ted, all they wanted to do was play sports at the JCC.

Lerner earned his B.A. from the University of Pennsylvania and his M.D. from the University of Pittsburgh School of Medicine in 1986. He did an anesthesiology residency at the Medical Center Hospital of Vermont in Burlington. He worked at several hospitals and briefly served as a senior lecturer in anesthesiology at a hospital and university in Malawi, Africa, before he was recruited by Kosair Children’s Hospital to come to Louisville in 1999. Today, he is the director of the Veterans Administration Medical Center’s Pain Management Clinic.

Lerner and his wife, Nancyanne, love Louisville so much that they have chosen to raise their family here. “Our son, Aaron, 13, will grow up here,” he said, “and our daughter, Rachel, 8, was born here and will grow up here. We have been adopted by a lot of families here, and our kids have a lot of new aunts and uncles they never had. That is good.

“Because of the JCC,” he continued, “our kids have strong Jewish identities.  It is all good!!” The children attend the Louisville Hebrew School, participate in activities at the JCC and go to Beber Jewish summer camp.

The Lerners are members of Adath Jeshurun.

In 2000, Lerner was one of the first Louisvillians to take the ERG (Emergency Response Group) program at Western Galilee Hospital (WGH) in Nahariya, Israel. WGH is part of the Jewish Community Louisville’s Partnership with Israel Region and the ERG program, which trains doctors and other medical personnel in mass casualty response, is a major part of this international collaboration.