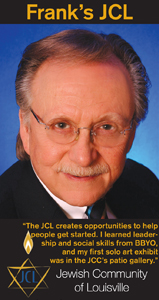 Frank Weisberg grew up at the Jewish Community Center and loves to reminisce about the great times he had in BBYO.

“The JCC was the hub of all my activities as a teenager,” he said. “I was very involved in BBYO and went to regional conventions.

“The experiences I had in AZA have helped me in the social aspects of my life,” he continued, “everything from learning how to chair a meeting to getting up and giving a talk. And I have maintained close friendships over the years with the majority of people in my Resnick AZA Club.”

Today, Weisberg is still active at the JCC, but his focus has changed. An accomplished artist who specializes in the photo-realism style of painting, he has been active in the visual arts program at the Center since the 1980’s. He served as chairman of the committee for five years and continues to support it.

“The JCC gave me the opportunity to have my very first solo art show,” he said. He’s been involved in several other shows there, including a couple of solo shows. He’s also had numerous shows in other venues since.

Weisberg is also a graduate of the Florence Melton Adult Mini-School.

“The Center will always be near and dear to my heart,” he said. His father, Charles “Pinky” Weisberg, was a past president and BBYO leader, and Frank’s children grew up there, too.

Now that the JCC and the Federation have merged, Weisberg says, “The Jewish Community of Louisville has my support and I’m only hoping for good things.” The reorganization and revitalization of the community is “something that’s well needed,” he continued, “and I thank everybody who’s involved for all their efforts.”

Weisberg has been on the Boards of Jewish Hospital, the Jewish Community Federation, Four Courts and Jewish Family & Vocational Service (now Jewish Family & Career Services).  He’s also been on Foundation Board of the University of Louisville and the board of the Louisville Visual Arts Association, and served as its president for five years.

Professionally, he is a realtor and past chairman of The Prudential Parks & Weisberg Realtors. He’s been a leader in many industry organizations and earned numerous awards for his professional activities.

Frank and his wife, Barbara, have three adult children, Nicole, Bradley and Danielle.