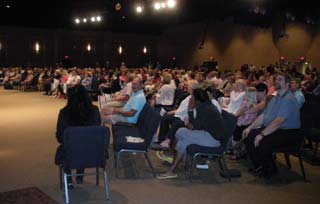 Hundreds gathered together at the Evangel World Prayer Center on Sunday, June 13, for a Standing with Israel rally sponsored by Christians United for Israel (CUFI). The host congregation invited the community to join them, bringing Christians and Jews from different denominations under one roof to show their mutual support for Israel and educate each other about conflict in the Middle East.


Colonel Somerville, the featured speaker of the evening, served as an intelligence officer specializing in the Middle East. His presentation outlined the history of Israel and her neighbors. He urged Christians to express their solidarity with Israel and to help promote peace in the Middle East. 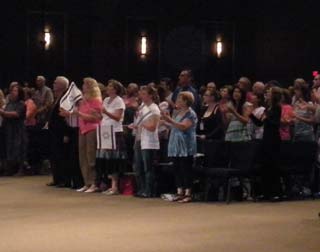 “We believe that the Jewish people have a right to live in their ancient land of Israel, and that the modern State of Israel is the fulfillment of this historic right. We maintain that there is no excuse for acts of terrorism against Israel, and that Israel has the same right as every other nation to defend her citizens from such violent attacks. We pledge to stand with our brothers and sisters in Israel and to speak out on their behalf whenever and wherever necessary until the attacks stop and they are finally living in peace and security with their neighbors.”

He concluded, “there has never been a more critical time in our lifetimes for Christians to support Israel than now.”
At CUFI’s fifth annual Washington D.C. Summit, July 20-22, the group will seek to communicate with and educate elected officials in the United States government about Israel.

Wahba’s presentation received three standing ovations from the crowd. He began by telling the audience about his past. Born in Cairo, Egypt in 1946, he lived there until the age of fourteen and traces back his ancestry to his great grandfather, Saad Wahba, who was born in Egypt in 1847. Wahba spoke to the fact that he was but one of the million Jews from Arab and other Muslim countries that were forced by governments to leave their homes during the establishment of the State of Israel.

“It is not true that Israel was created in the Middle East only so as to accommodate European Jews who had been persecuted throughout Europe. Today more than 50 percent of all Jewish Israelis hail from Muslim countries,” said Wahba. 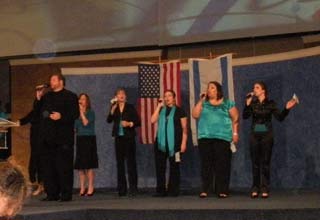 He pointed out that demonstrations and protests since the May 31 Israeli raid on a flotilla bound for Gaza call for the removal of the Gaza blockade fail to recognize Israel’s right to protect itself from attack. He also drew attention to the lack of demonstrations, attention, and outrage against the abuse and treatment of Palestinians, Muslims, and Arabs around the world by Islamic dictatorships and radical terrorist groups. Wabha reminded the audience about the terrorist attacks that occurred towards the beginning of the month, where gunman opened fire at a place of worship in Lahore, Pakistan, killing 90-plus Ahmadi Muslims and a suicide bomber who walked into a wedding in Afghanistan and killed 40 civilians.

Wahba also challenged international press coverage, stating that “major damage is done when reporting on the question of the Israeli-Palestinian issue,” noting that coverage does not discuss Syrian and Iranian actions promoting violence against Israel and the indoctrination of children.

He contends,“the truth about Israel is not told. As a person who loves progress, I am obligated to defend liberty, culture, civic education for children, coexistence and the laws that the Tablets of the Covenant made into universal principles. I am here to say that as a Jew and an American, I have a moral duty to stand by Israel, because if Israel is destroyed; liberty, modernity and culture will be destroyed too.” 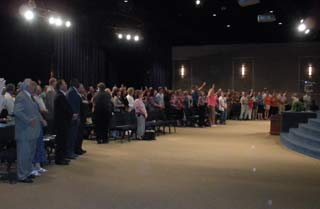 He closed by stating that the path to peace relies on the freeing of Gilad Shalit, the Israeli soldier kidnapped by Hamas from his post in Israel four years ago, the cessation of rockets being launched into Israel, and stopping the calls for the destruction of the State of Israel.

Rabbi Wasser’s remarks concluded the rally. “ I know I am amongst brothers and sisters who support and share faith to come together for peace. There is a lot of support for the state of Israel outside the Jewish Community and it is important that all friends of Israel speak up and let the world know of their support.” Rabbi Wasser also led the closing prayer of Tefillat Limdinat Yisrael (Prayer for the State of Israel).