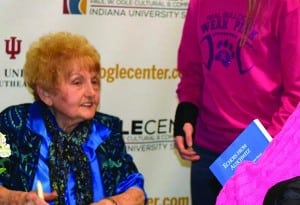 More than 1,000 people showed up at Indiana University Southeast to hear Holocaust survivor Eva Mozes Kor of Terre Haute, IN, speak on February 10. So many people showed up, the lecture had to be broadcast to a second auditorium at the Ogle Center and to the students’ dining hall to accommodate the crowd. After the lecture, it was announced that it was the largest audience in the history of the IUS campus.

The lecture was part of IUS’ commemoration of the liberation of Auschwitz on January 27, 1945. On February 4, Dr. Angelika Hoelger of IUS gave a lecture on Understanding the Holocaust and on January 28, IUS showed Kor’s documentary film, Forgiving Dr. Mengele.

Kor and her twin sister Miriam were born in Romania in 1934. At the age of 10, the twins were transported to Auschwitz, where they became subjects of Nazi doctor Josef Mengele, who made them into human guinea pigs. The two were subjected to many unknown experiments. Because of some of these experiments, Miriam’s kidneys never grew beyond the size they were at age 10, and later Eva gave her sister a kidney. “I had two kidneys and only one sister,” she said.

Her sister still struggled with physical ailments, and Eva decided to search for Mengele’s records to try to find out what they had been injected with, but she still hasn’t found an answer. Miriam died of cancer in 1993.
“It is a human right to find out what was injected into your body,” Kor said.

After the war, Eva and Miriam moved back to Romania, but still struggled with persecution for being Jewish. After a few years, they moved to Israel where they went to school. Eva rose to the rank of Sergeant Major in the Israeli Defense Force. In Israel, she met another Holocaust survivor, Michael Kor, whom she married, and the two settled in Terre Haute.

Kor has since traveled to Auschwitz several times with other Mengele twins, and even once, at the 50th anniversary of the Auschwitz liberation, with a former Nazi doctor, Dr. Hans Münch. Münch had served at Auschwitz and knew Mengele, but never worked directly with him. Kor asked Münch to go to Auschwitz and sign a document stating what he did and saw there so that she could prove to Holocaust deniers that it was true.

At IUS, Kor said she once gave a lecture at a prison in Terre Haute, and a group of Muslims stood up and told her that they didn’t believe a word she had said. Her answer: “I wish that was true. Then it would have meant that my family was alive. I know I had a mother and father and two older sisters. They disappeared. If you think it didn’t happen, then tell me where they are!”

During the visit to Auschwitz with Dr. Münch, Kor announced to all there that in her name alone, she forgave the Nazis. Since then, she has worked to spread the word of forgiveness. Forgiveness is “life changing,” she said. “I have the power to forgive. No one can give it to you and no one can take it away. I was free of Auschwitz, free of Dr. Mengele.”

She said that one Rabbi told her that in Jewish tradition, one cannot forgive unless the perpetrator has repented. Her response was, “Where does that leave me? I have to remain a victim for the rest of my life? I refuse to be a victim.”

Kor founded the CANDLES Holocaust Museum in Terre Haute. CANDLES is an acronym for Children of Auschwitz Nazi Deadly Lab Experiments Survivors. She encourages those who hold on to anger in their lives to write a letter to the person who harmed him or her and at the end, write, “I forgive you.” “Forgiveness is a seed of peace,” Kor said. “I want to sow the seed of peace throughout the world.”

How do you teach a young person the value of tzedakah and the skills he/she will need to become a philanthropist? The Jewish Federation of Louisville’s B’nai Tzedek program is designed to do just that in a way that makes …

Throughout our history as a people, the Jewish community has made taking care of those in need a priority. Often that means providing refuge and support for those fleeing persecution in other lands. In 1934, two brothers, Elias and Ike …

After months of planning, Louisville is ready to host visitors from Israel’s Western Galilee and the Partnership 2Gether Central Consortium that includes the Jewish communities in Canton, Dayton, Toledo and Youngstown, OH; Indianapolis, Northwest Indiana and South Bend, IN; Des …