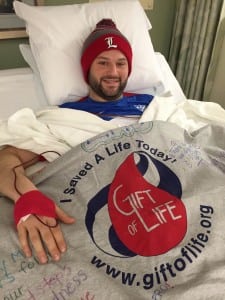 When Eric Gurevich went on a Birthright Israel trip six years ago, he never imagined it would lead to saving a life.

While in Israel, his group saw a presentation by Gift of Life, a bone marrow registry organization founded in response to a lack of Jewish bone marrow donors. After the presentation, Gurevich got his mouth swabbed to get on the registry.

Two years ago, Gurevich got a call from the organization saying he was a match for someone with a blood disorder, but after some testing that connection didn’t work out, and he assumed it was because the patient wasn’t able to take the donation.

On February 19 of this year, he got a call from Gift of Life and was told the same patient, a 53-year-old man with myelodysplastic syndrome, needed the transplant, and they couldn’t stress enough that the need was urgent. Gurevich felt compelled to respond.

“I was on a plane to Washington, D.C., the next day,” Gurevich said. “It’s all voluntary, of course, but they were basically asking me to save a life.”

He went to Washington for extensive testing, then was sent back home to await the next call. He had to take injections of Neupogen, a drug that stimulates the body to make stem cells. He said he had no serious side effects from the drug, other than being a little tired and achy.

On March 9, gave his donation. He was at the hospital at 7:30 a.m. and – 1.3 billion stem cells later – was free to go by lunchtime. He and his girlfriend went to lunch afterward, and then he took a nap.

“I was tired, but nothing too bad,” he said.

A common misconception of bone marrow donation, Gurevich said, is that the donor has to endure a painful procedure in which doctors drill into the hip bone. The modern preferred method is to harvest stem cells from blood. Gurevich said he was hooked up to an apheresis machine, which separates stem cells from the patient’s whole blood. The blood is then put back into the patient. Gurevich was back to work on Tuesday and was teaching a yoga class on Wednesday. One week later, he said he felt completely back to normal.

Gurevich said he has no contact with the man who received his stem cells, but because the genetics have to be very similar, assumes that he is of Eastern European Jewish descent, like Gurevich. Gift of Life will give him periodic updates on the man’s condition.

Gift of Life made the donation simple, he said. “It’s such a seamless, easy process,” he said. “Only about one in 500 people will be a match.”

Throughout the process, he was with a coordinator who “was really kind and demonstrated the quality of the organization.” The coordinator brought him gifts and was with him through the donation, booking his travel and hotel stays.

Gurevich said he hopes his donation will inspire others to get tested. “I was going to keep this quiet and not tell anyone about it, but I decided that it was a unique opportunity to be an advocate for donation.”

Gift of Life is an organization founded by Jay Feinberg, who was diagnosed with Luekemia. He was told he’d never find a match because a patient’s best chance of finding a genetic match lies with those of similar ethnic background. However, the worldwide registry was not representative of all ethnic groups, and Feinberg was Jewish.

Feinberg and his family organized donor drives to find a match and registered tens of thousands of potential donors. Feinberg found a donor in May 1995, four years after efforts began. The organization he founded now has more than 240,000 registered donors, has found more than 11,000 matches and facilitated 2,841 donations.

Those interested in bone marrow donation should visit Giftoflife.org or Bethematch.org.

A winter storm struck Louisville on the eve of Purim, yet Chabad maintained its holiday programming and over 70 people, including members of many of our local synagogues and temples braved the elements to join the celebration. The storm continued …

The JCC Patio Gallery is proud to present work by two sister artists, Stephanie Baldyga-Stagg and Julie Baldyga. While they share familial blood, beyond that, they differ. Two Sisters will open on April 3 with a reception from 2-4 p.m. …