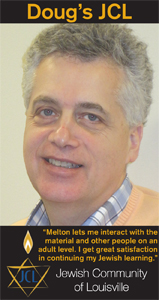 When Doug Sharps heard about the Florence Melton Adult Mini-School offered by the Jewish Community of Louisville, he was attracted to the program’s promise that he would be able to interact with the material and other people on an adult level. He has not been disappointed.

“I get great satisfaction in continuing the learning process,” he said, “and there are lots of unexpected byproducts as well.” He enjoys the social aspects of the program and the opportunity to study in a different way. “The level of instruction is really remarkable for a community this size,” he added.

Originally from Skokie, IL, Sharps received an A.B. from Washington University in St. Louis, MO, and an M.A. from Tufts University in Medford, MA. After studying in the literature Ph.D. program at the University of Chicago, he went on to earn a law degree there.

When he graduated law school in 1984, he recounted, he came to Louisville “to join my fiancée, now my wife, Susan Griffin, who is chair of the English Department at the University of Louisville and a Distinguished University Scholar.”

From his arrival in town until 1990, Sharps practiced corporate law at Wyatt Tarrant Combs. Then he joined a start-up company that today is the successful Trover Solutions. There, he has served as general counsel, CFO and now executive vice president for business development.

Sharps and his wife have been members of Congregation Adath Jeshurun for 25 years. Both of them have served on the Board and have been active in synagogue life. They particularly enjoy supporting programs like the annual Music Festival and the 92nd Street Y Live program.

He’s in a number of reading groups and enjoys traveling. In fact, Susan was recently awarded a Fulbright fellowship, so they are looking forward to spending time in Belgium.

The Sharps have two adult children; a son, Griffin, who lives in Chicago, and a daughter, Emma, who is a student at American University.