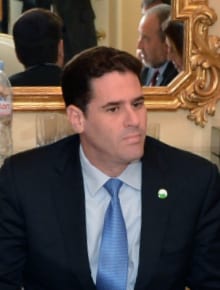 Israel’s Ambassador to the United States predicted the world would know within days if Israel’s current government will continue in power or if the country will go to early elections.
“We’ll see what will happen,” Ambassador Ron Dermer told Community Thursday following the Gov. Matt Bevin’s signing of an anti-BDS order in Frankfort. “We’ll know in the next few days.”
The Israeli government is facing a crisis following a cease-fire with Hamas following a 25-hour bombardment of southern Israel near Gaza.
Defense Minister Avigdor Liberman resigned in protest, which means that Prime Minister Benjamin Netanyahu also holds the defense and foreign portfolios, the three most senior positions in the government.
Liberman’s exit also means that the governing coalition holds only a two-seat majority in Knesset.
Netanyahu can cling to power, even with such a slim margin, for the rest of his term. But other ministers are calling for elections. If they bolt, the coalition would collapse.
The biggest problem appears to be with Education Minister Naftali Bennett, who heads the pro-settler Jewish Home party. He says Netanyahu must name him defense minister or he will resign.
But Finance Minister Moshe Kahlon of the centrist Kulanu party wants early elections, as does Interior Minister Aryeh Deri of the Sephardi haredi Orthodox Shas party.

(JTA contributed to this report.)