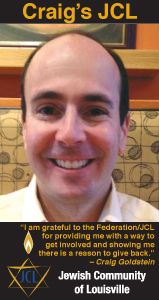 The couple both got jobs right away and began raising their family. Although Goldstein admits he wasn’t a model student growing up nor was he interested in BBYO or synagogue-related activities, when Robin Miller, who worked at the time with the Jewish Community Federation (now the Jewish Community of Louisville or JCL), asked him to become involved, he said yes.

“I figured I was ready. I had a reason to do it and I decided I needed to give back to the Jewish community,” he said.
Together with Elise, he co-chaired Israel in the Park and the Federation’s Young Leadership Development program. Goldstein remembers doing “a ton of work” to help develop the Leadership, Education and Development Series (L.E.A.D.S.) for younger leaders and Livnot Leadership to help re-involve seasoned leaders. He also served on the board at The Temple during his first year in town and was invited to serve on the executive committee the following year.

After taking some time off to earn an MBA from Bellarmine University, Goldstein again became involved with the Federation when he and Elise co-chaired Super Sunday. He also returned to The Temple Board and created their very successful Young Adult group. He currently is president-elect of the congregation and serves on its Marketing and Human Resources Committees.

His theory: We all do things for a reason. I tend to see things as they could be and then build toward that objective. Once you become involved with an organization, you understand what you can do – you have a vision and you want to make a difference – then you develop a strategy to make that happen. You do things you want to do and have fun while you are helping to achieve your goals.

“It’s not about ‘I,’” he declares, “it is always about ‘it.’ You go that extra mile and give 110 percent in everything you do. You get folks on board by having a plan. Folks get tired of giving to things; they need to envision how they are going to make the community succeed 20 years into the future.”

Goldstein also is involved with the Bellarmine Alumni Association and served as president of its Board of Overseers for three years.

With all his commitments, Goldstein still found time to coach his son, Drew’s (age 9), basketball team and to be involved in activities with his daughters, Arianna (age 13) and Maraye (age five). The Goldsteins are hoping their volunteer activities are setting an example for their children; if they see mom and dad involved, they will want to spend time working for causes as well.

Goldstein concludes, “We need more volunteers and we need to train them and thank them for what they do. They are the lifeblood of any organization and we need them to keep our Jewish community running 20 years from now. If people understand a reason to give of themselves and their resources, they will.”