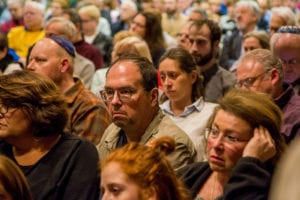 As the vigil for 11 worshippers killed in a Pittsburgh synagogue and two shoppers gunned down at the Jeffersontown Kroger got under way, Shalom Malka’s mind went to happier thoughts.
He had attended Tree of Life, scene of Saturday’s carnage, in the 1980s while he went to graduate school at the University of Pittsburgh.
“It’s funny,” recalled Malka, who today lives in Louisville and teaches at Sullivan University. “I was raised Orthodox and my wife at the time was Reform, so we compromised.”
(Tree of Life, a Conservative synagogue, has historically been part of the liberal end for that movement.)
Malka was one of literally hundreds of Louisvillians who packed Temple Shalom Sunday night, October 28, for the vigil. No reliable crowd estimate is available, but practically every seat was filled; rows of people lined the walls and approximately 75 more, who could not get in, listened to the speeches from the parking lot out back where speakers were placed..
What they heard were Louisville’s rabbis, cantors and civic leaders calling for unity, invoke prayer as therapy, and reject the coarsening public hate speech that led to both attacks. 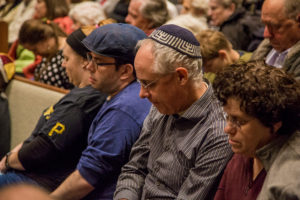 “We are here because we care, we are here to stand together, we are here because we are not willing to accept the hatred and violence and prejudice that is surrounding us,” said Rabbi Beth Jacowitz Chottiner of Temple Shalom. “We are here to say this is not OK. This is not the United States that I grew up in; it is not the United States I want my kids to grow up in, nor is it the United States I want for my grandkids.”
Rabbi Michael Wolk of Keneseth Israel invoked a Jewish version of Article 5, the NATO rule that an attack on one ally is an attack on all.
“All Jews are responsible for each other,” Wolk said. “An attack on one of us is an attack on all of us.”
Rabbi Joe Rapport of The Temple expanded upon Wolk’s words to include the victims of the Kroger attack.
“When someone kills my neighbor because of the color of their skin at a grocery store or in their house of worship, it’s an attack against everything I believe as a Jew,” he said. “And when Jews are killed celebrating Sabbath in their own synagogue for nothing more than being Jews, it is all of our sanctuaries that have been violated.”
The shootings in Pittsburgh are believed to be the deadliest anti-Semitic attack in American Jewish history. Authorities are treating them, and the Kroger shootings, as hate crimes. 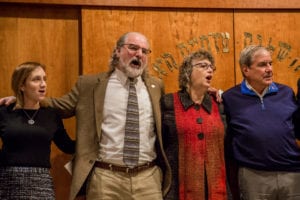 U.S. Rep. John Yarmuth, mindful that he was one political leader amid a slate full of religious leaders at the vigil, spoke of the “moral obligation” that members of Congress have to protect and heal their people.
“There is a soul in this country and if we do not nurture the soul of the country, we will lose it,” he said. “We need to recognize our obligation to preserve the soul of this country.”
Daniel Frockt, representing Louisville Mayor Greg Fischer at the vigil, got more political, addressing the epidemic of gun violence in America and noting that legislative responsibility for firearms rests with state and federal leaders.
“Every time someone takes a gun and creates a tragedy, what is the response from our leaders, those who have the power to make our country safer, our cities safer, our schools, our synagogues, our churches and our grocery stores safer?” he asked. “They act as if nothing can be done.”
Rabbi Simcha Snaid of Anshei Sfard, in what may be the first time an Orthodox rabbi has spoken from the bima of Temple Shalom, a Reform synagogue, read aloud the names of the dead from the Tree of Life shootings.
Rabbi Laura Metzger, who said “we need prayer,” called upon the assembly to pray aloud in their own words. For a few minutes, the sanctuary was alive with a low, married murmer of chants, words and music.
Sara Klein Wagner, president and CEO of the Jewish Community of Louisville, which organized the vigil, called on everyone to “commit” to a “loving, caring and safe community for children and for our future.”
She acknowledged the task is “exhausting” and “overwhelming” but it can still be done.
“It’s our collective responsibility to speak up, to speak out and to educate others,” Wagner said.
Rabbi Bob Slosberg read Psalm 118, Cantor David David Lipp sang Psalm 23, Cantor Sharon Hordes sang Gesher Tzar Me’od and Rabbi Gaylia R. Rooks read a poem she had written “five minutes after Israeli Prime Minister Yitzhak Rabin was assassinated in 1995, which resonated in the wake of the Pittsburgh and Kroger shootings, too.
Rabbi Stan Miles, who opened the program, invited the multiethnic crowd of Jews, Christians and Muslims to the synagogue of their choice, on Friday and Saturday, November 2 and 3 as part of the Nationwide #ShowUpFor Shabbat campaign sponsored by the AJC.
Attending a synagogue that weekend, Miles said, will “prove to the haters they’ll never win.”