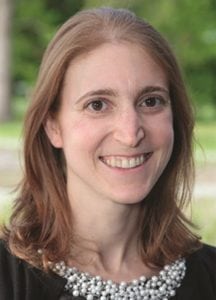 Becky Swansburg
“It’s an incredible honor to receive this award,” Swansburg said. “Our generation is responsible for the future of Jewish Louisville, and I take that responsibility very seriously. Volunteering with the JCL is some of the most rewarding work I’ve ever done.”Leadership in the Jewish community seems to run in Swansburg’s family. Her mother, Mickey Ruby, was the recipient of the Joseph J. Kaplan Young Leadership Award in 1989 and her father, Marty Ruby, was the recipient of the Kaplan Award in 1991. Both have been very generous with their time and talents through the years.

In fact, Swansburg remembers sitting in The J doing homework while her father was in Board meetings and hanging out with college students as her mom lead Hillel meetings. Today, it is Swansburg who sits in JCL Board meetings while her children are involved in activities at The J. Her parents were also leaders at The Temple and National Council of Jewish Women.

For the last two years, Swansburg has been chair of the Jewish Community Relations Council and in that position has served as a member of the JCL Board.

One of the most meaningful endeavors she has been involved with through the JCRC was the co-sponsorship with the PACE, The Pakistani American Alliance for Compassion and Education, of a Syrian family that immigrated to Louisville this year.

“Working with the Islamic community, getting to know the AlSaid family and helping them adjust to life in Louisville has absolutely changed how I look at our city and our country,” she said.

Swansburg also enjoys the JCRC’s interfaith work and work within our Jewish community to help religious institutions find common ground and speak with a common voice.

She sees the Cole Award as a great way to encourage participation by young people. “Our young leaders are the people the community is depending on to take the lead for the next 30 to 40 years,” she said. “Our parents did a great job and now it is our turn to do that for our children and grandchildren.”

Swansburg’s passion for JCRC’s work is evident. In 2014, she won the JCL’s Julie E. Linker Community Relations Young Leadership Award and the year before that she was chosen as one of 10 next generation JCRC leaders to participate in the year-long Frank Family Leadership Institute. The program gave her the opportunity to travel to Poland and Israel and to attend the Jewish Council for Public Affairs Plenum.

As a result of her experiences and her own dedication and hard work, Swansburg was asked to serve as vice chair of JCPA’s 2015 Resolutions Committee and as a member of their board.

Louisville has a strong tradition of leadership with JCPA. Both Lewis D. Cole, z”l, and Marie Abrams chaired the national organization and Ron Abrams served as treasurer. “JCPA has a tremendous respect for Louisville,” Swansburg said, and its leaders still talk about both past chair from our community.

Swansburg is a Louisville native who “was very active in the Jewish community, BBYO and NFTY,” even serving as a NFTY regional officer as a teen. “When I went to college,” she continued, “I was president of Hillel and was a founder and co-president of Interfaith Council at Middlebury College.

“When I moved to Washington, DC, to start my career,” she lamented, “I fell out of touch with the Jewish community.” She missed that involvement, “so when my husband and I moved back to Louisville in 2006, one of the things I wanted to do was get reengaged.”

Swansburg is a member of The Temple’s Board of Directors and has worked with its youth group. She co-chaired the popular PJ Library program and is active in YAD.

Swansburg is the chief marketing officer at Stonewood Financial Solutions, a local financial services firm. In addition to her activities in the Jewish community, she has served on the boards of the local chapter of the National Association of Women Business Owners and the Rauch Planetarium at the University of Louisville.

She earned her B.S. in political science from Middlebury College and her M.A. in communications from Boston University. Following her graduation, she worked for a U.S. congressman and briefly at the White House before returning to Louisville with her husband. She worked for Greater Louisville Inc. before taking her current position.

In the past, she served on the Board of Directors for the Kentucky Chamber of Commerce Executives and as a Teach Kentucky mentor. She was also named to Business First’s prestigious ‘Forty Under 40’ list.

On the personal side, she is a member of Le Leche League, which supports breastfeeding women, and the Louisville Mothers of Twins Club.

She and her husband, Michael, have twins, Molly and Robert. 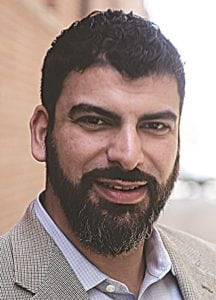 For Laurence Nibur, being a leader and active participant in the Jewish world is a core value, and to recognize his commitment, the Jewish Community of Louisville has named him the recipient of the 2016 Joseph J. Kaplan Award.

Nibur is a member of the JCL Board of Directors and has served as the agency’s treasurer. He is outgoing YAD co-chair, along with Keren Benabou, is a past member of the Jewish Community Relations Council, a past Super Sunday co-chair, and is currently serving on the finance, and the endowment investment committees of the Board.

“The YAD Ambassador Program is my recent passion,” he said. “We have almost a dozen 20- to 30-year-old young, passionate Jewish leaders who are excited and actively programming fun, unique, engaging events throughout the community. Whether it’s a pop up deli with lox and bagels at Galaxie Bar, a summertime poolside Shabbat, career mentoring in partnership with Jewish Family & Career Services, a first Friday Shabbat dinner or just one of the happy hours, it’s important to have a variety of activities, and the Ambassadors Program is delivering that for our young adults in Louisville.

“It makes me feel very proud to know that there is such a strong pool of rising young leaders ready to accept the responsibility for our city,” he added.

“It’s humbling to be included in such an esteemed roster of Kaplan Award recipients,” he continued, “from our Mayor for Life, Jerry Abramson to a host of other standout Jewish leaders. I’m honored to have the opportunity to continue their work.”

“Having attended Eliahu Academy,” Nibur observed, “I share Mr. Kaplan’s passion for Jewish education across our city. And, just as Mr. Kaplan was instrumental in relocating the JCC to Dutchmans Lane, I’m excited to be part of the Board of the JCL as we consider our community and what our future campus and presence in the city should look like for the next 60 years.”

Nibur moved to Louisville with his family in 1986. He attended Eliahu Academy, was a member of Mu Sigma Resnick AZA in the BBYO program, and is a past member of the Jewish Community Center’s Board of Directors. During his time on IU’s Bloomington campus, Nibur was very active in Hillel and served terms as the organization’s president and treasurer.

He is a past board member of The Temple, a proud Eagle Scout from Temple’s Troop 30 and served as youth group adviser for TiLTY, the congregation’s high school youth group for nearly 10 years.

Nibur has a very strong connection to Israel as well. “Almost all of my extended family live in various parts of Israel. I’ve been a dozen times, including last summer, and always look forward to going back.”

Nibur has also traveled extensively, living in Sydney, Australia for 4 years; London, England for 4 years; and Chicago for 3 years, experiencing what it means to be a new arrival to established Jewish communities.

“My wife, Laura, is a huge reason why I am able to devote so much time to the community,” he said. “As an interfaith couple, we are actively involved in supporting her church as well. We both feel it’s important to give back to our community with time and resources when we are able.”

The Nibur’s have two sons, Hunter, 17 and Heath, 8; and two daughters, Isabela, 8 and Sloan, 7. “Despite a very busy family life,” he continued, “prioritizing time to volunteer in the community is important to our kids’ future.”

Nibur is a graduate of Indiana University’s Kelley School of Business and holds a dual Bachelors of Science in finance and marketing. He is the director of planning and development at Kindred Healthcare. “I love that Kindred is so active in corporate support of the community-at-large and the Jewish community,” he stated. “They are a lead sponsor in our golf outing. I am grateful and proud to work for an organization with so many leaders connected to our Jewish community.”

Joseph J. Kaplan Young Leadership Award
Joseph J. Kaplan was a devoted member of the community who was a leader in Jewish education and the served as president of the Young Men’s Hebrew Association (YMHA), the predecessor of the Jewish Community Center, and was instrumental in its relocation to Dutchmans Lane. He often encouraged people to remember the Jewish community in their wills. The Award was established during his lifetime and continues today in honor of his memory.

Imagine if we could … “see ourselves in a world in ways we have never seen before?” Lisa Eisen, vice president Charles and Lynn Schusterman Family Foundation. Why did this one specific slide from one presentation at the three day …

The 2016 Annual Conference for the Jewish Council for Public Affairs took place in Cleveland, OH, May 14-17, and the dominant theme was uniting to confront the various challenges our Jewish communities face. The JCPA is the umbrella organization of …