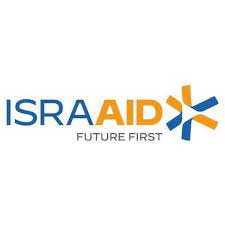 IsraAID has sent teams of specialists to western Kentucky to assist in the cleanup and relief efforts in tornado-stricken areas.
But further aid from the Israeli-based non-governmental aid agency may be hindered by the resurgent COVID pandemic.
The first team of five Israeli volunteers is already on the ground in Mayfield, focusing on debris removal and home rehabilitation, and a second team is on its way.
The but the latest COVID surge in the United States has put the dispatch of more teams into question, according to IsraAID spokesman Ethan Schwartz.
“Israel just introduced travel restrictions designating the U.S. a ‘red country’ COVID-wise,” Schwartz said Wednesday, “so that affects our capacity to send more teams in the coming weeks.”
Omicron has just replaced Delta is the dominant COVID variant here, accounting for 73 percent of all new infections as of Tuesday, according to the Centers for Disease Control.
IsraAID is a humanitarian organization that responds to emergencies worldwide, bringing help such as search-and-rescue services, rebuilding communities and schools, aid packages, medical assistance and post-psycho traumatic care.
In addition to Kentucky, IsraAID announced this week that it is sending a team to the Philippines to assist in relief work following Super Typhoon Rai, which killed at least 375 people.
Israel’s consul general to Atlanta, Anat Sultan-Dadon, first told Community that that IsraAID teams were on their way following her visit to the region on Friday, Dec. 17. 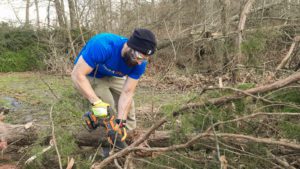 An IsraAID volunteer in Mayfield cuts up a tree felled by the recent tornado outbreak. (photo provided by IsraAID)

In Kentucky, IsraAID is working with its U.S. counterpart, Team Rubicon on cleanup efforts, and other tasks.
Vulnerable families unable to handle “physically intensive work” will get priority, according to information provided by IsraAID via the consulate. Further, it said its teams will include volunteers with “specific expertise” in the tasks at hand.
This is not the first time IsraAID has responded to a natural disaster on U.S. soil. Since 2017, its teams have provided disaster relief to communities affected by hurricanes in Florida, Texas, North Carolina and Puerto Rico, as well as wildfires in northern California.
“Our thoughts are with the communities across the affected area who have been left reeling by [the] tornadoes and with the families who have lost loved ones,” IsraAID CEO Yotam Polizer said in a prepared statement. He added that the teams will “do everything they can to support people in need.”
Sultan-Dadon was in Kentucky to deliver 400 backpacks to school children loaded with water, snacks, games, hygiene products and writing materials. She also met with local leaders and toured some of the damage.
She said will return to the region as long as there is “an Israeli presence here for the foreseeable future,” an apparent acknowledgement of the long rebuilding period to come.

Guest Columnist Rabbi Emily Cohen When I finished rabbinical school in 2018, I entered the “real world” with $40,000 in student loans. I acted fast, prioritizing repayment over everything else. Within six months, I paid nearly $10,000 to eliminate interest, …