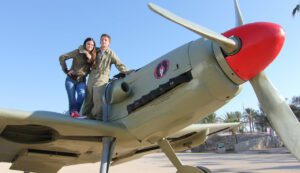 A publicity shot from “Sky Raiders,” one of the family movie offerings at the 2022 Louisville Jewish Film Festival.

Despite the pandemic that has now lasted two years, the Louisville Jewish Film Festival (LJFF) is slowly reentering the cinema.
Tricia Kling Siegwald, senior director of festivals & special projects at the Jewish Community of Louisville, has announced that the 2022 festival, slated for February, will screen two films at the Speed Art Museum. The rest of the film lineup will be shown virtually only.
The Speed requires all its moviegoers to be vaccinated and masked or a negative COVID test within 72 hours of a screening, and the theater must be at no more than 60 percent capacity.
“Their COVID protocols are outstanding,” said Siegwald, who is running her first film festival. “They’re pretty strict, and we like that. We feel comfortable partnering with them.”
LJFF reserves the right to change its screening plans depending on the COVID surge, she noted.
In all, this year’s festival includes 11 movies and documentaries, two free short-subject films and, in a new twist for the LJFF, a six-part drama series.
The two films to get live screenings this year are the opening night picture, Neighbours, the story of a Kurdish boy in Syria coping with a cruel school teacher who bans the speaking of his language and teaches hatred of the Jews; and Persian Lessons, a gripping Holocaust drama about a camp inmate who poses as a Persian language teacher to save his life but who knows not one word of the language.
Both films will be available for virtual screening as well.
As in past years, the festival is a mix of comedies, dramas and family pictures made primarily in Israel, though other countries – Austria, Canada, Israel, Italy, France, Germany, Switzerland, Jordan, Palestinian Territories, Qatar, Belarus, Russia and Sweden – are represented.
As in the past, some films will be controversial, such as the documentary Blue Box, a critical look at how the Jewish National Fund acquired land in pre-independence Palestine.
Siegwald asked festival-goers to screen the film with an “open mind.”
Same for 200 Meters, which addresses stark issues related to the separation barrier between Israel and the Palestinian Territories, and its impact on a father and his hospitalized son. The film is told from both sides of the barrier.
“These films are thought-provoking, and that comes natural for the Jewish community,” Siegwald said. Persian Lessons might be Siegwald’s festival favorite, not just because the main character is teaching a Nazi officer a language that he doesn’t know, but because of plot twists, which she declined to discuss, that left her with “goose bumps.”
“You have to see that film,” she urged.
But the marquee attraction to this year’s festival may just be the drama series Labyrinth of Peace, a six-episode program about a family in post-war Switzerland and how the war, and the Holocaust, left their mark on a “neutral” country.
Siegwald said the series is a major departure for the LJFF, taking advantage of the binge-watching craze that has taken off during the pandemic.
Other themes are addressed by this year’s films: the challenges of aging, same-sex romance, forbidden love, the dreams of children.
“Our films definitely are touching on different demographics, which is a goal,” Siegwald said. “Our goal is to try to have a little bit of something for everyone.”

By Lee Chottiner Community Editor Jews in Louisville and elsewhere are stepping up to help the people in the tornado-ravaged region of western Kentucky. The death toll from the tornados, which flattened several communities, causing millions of dollars in damage, …

By Lee Chottiner Community Editor IsraAID has sent teams of specialists to western Kentucky to assist in the cleanup and relief efforts in tornado-stricken areas. But further aid from the Israeli-based non-governmental aid agency may be hindered by the resurgent …