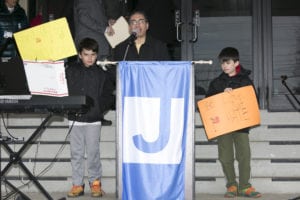 Dr. Muhammad Babar Cheema, flanked by his 10-year-old twin sons Adam and Harris, addresses the March 12 #WeStandTogether rally on the front steps of The J. Babar is the 2017 recipient of the Blanche B. Ottenheimer Award, which recognizes the service of a community leader, Jew or non-Jew. Babar, a Muslim, will accept the honor at the June 8 JCL Awards Meeting. (photo by Ted Wirth)

When two synagogues in Jewish Louisville were targeted this past January by threatening callers, Dr. Muhammad Babar Cheema knew something had to be done about it. So he did something.

The devout Muslim brought dozens of members of his faith community to Temple Shalom at the start of the following Shabbat. They joined hands, forming a ring around the sanctuary – and the congregants in the pews – in what Dr. Babar called a “circle of love.”

These may seem like extraordinary gestures, but not for Dr. Babar, as he is coomon referred to, this year’s recipient of the Blanche B. Ottenheimer Award. This is the kind of thing he does all the time.

Dr. Babar will headline the 2017 Jewish Community of Louisville Awards Meeting, which will be held Thursday, June 8, 6:30 p.m., at The J.

“You would be hard-pressed to find a greater champion of compassion, service, and humility than Dr. Babar,” said Jewish Community Relations Council President Matt Goldberg. “Having worked with him on many issues over several years, it is an honor to call him a colleague and friend. He is well deserving of any honor he receives and it does our community a great service to have him join the list of other distinguished winners of the Ottenheimer Award.”

Nominated by JCL President and CEO Sara Klein Wagner, the Blanche B. Ottenheimer Award is given annually to a leader who has improved the quality of life in Louisville, in Kentucky and beyond.

Dr. Babar, a long-time advocate for interfaith cooperation, called for closer ties between Jews and Muslims.

“Due to the times we’re facing in our own country, it is imperative for the Jewish and Muslim communities to work together,” he told Community, “not only for the problems they are facing but for the other minorities whose problems make them more vulnerable than us.”

A Pakistani by birth and an internist and geriatric physician by training, Dr. Babar, has a long track record of community and interfaith service.

He raised more than $5,000 for disaster relief following the devastating 2010 Haiti earthquake. When floods struck Pakistan that same year, he raised approximately $20,000 for flood relief. His work provided locally made water purification systems to and housing construction for the widowed, injured and disabled victims.

Both drives were done in conjunction with Jewish leaders or drives in Louisville, he said.

The dinner, which is in its seventh year, is held each year during the month of Ramadan, attracts as many as 500 people, including several Jews. The next dinner is set for June 7, 8 p.m., at the Second Presbyterian Church. Rabbi Gaylia R. Rooks is slated to speak.

Dr. Babar’s passion for interfaith work stems from his earliest days in his native land.

“When I was growing up in Pakistan, the media was state controlled… and it had a lot of stereotyping about the Jewish community as seen through the actions of Israel,” he said. “They were forgetting this basic fact that Judaism is a faith like Islam, and we need to look at it like the faith of Moses, David and Solomon.”

So when he came to America, and to Louisville in particular, he made Jewish friends and tried to better understand the religion.

“That’s when I realized that Judaism was as compassionate a faith as Islam and we shouldn’t look at it through politics.”

Most recently, Dr. Babar, who is president of Muslim Americans for Compassion, played a role in the Love from Louisville drive, which sent thousands of pounds of clothing, shoes and other necessities to Syrian refugees in Greece. He is slated to visit the refugee camp where the supplies were sent when he travels abroad this month.

He said he hopes his work helps to break down “man-made barriers between the faiths.”