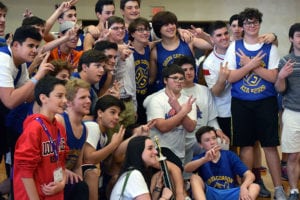 The Louisville A squad won this year’s AZA Drew Corson Basketball Tournament, beating the Indianapolis A team for the second straight year.

Louisville guard Gabe Sherman believed his squad was the favorite all along.

“We don’t like losing,” he said. “We’re very good. We are deep. We have 10 guys on our A team and we can all start for everyone. We are a very unselfish team and also very aggressive. That is what makes us good.”

JCC teams from Louisville, Indianapolis Cincinnati and Columbus were in the Derby City for this year’s contest.

But it’s not all about winning.

“It really is about more than just a basketball tournament,” Sherman said. “It’s not just about basketball. It’s about seeing everyone and having a really good time.”

“Fun’s a big part of this tournament,” Indianapolis Forward Eyal Friedman said. “Obviously, you want to win, but everyone comes here because they want to have fun with each other. It’s not just winning.”

The tournament, which rotates among the four participating cities, is named for Drew Corson, a Louisville teen who passed away while playing in the event back in 1994. The local AZA chapter also is named for Corson.

BBYO Louisville City Director Kari Semel said the tournament has evolved to where winning and losing, while important, are not the main components. 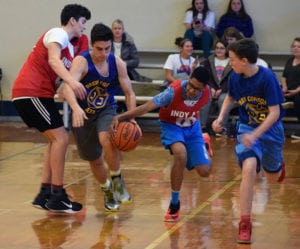 “A lot of our core Jewish values that drive our youth, can be translated through sports, Semel said. “It’s great seeing the teamwork out there, and the boys working together. If someone gets injured, the players stop what they are doing because above all else, they are not enemies. They are friends who care about each other.”

Linkon said he makes sure the players walk that fine line between emphasizing winning and looking at the big picture.

“That’s something we teach in BBYO besides just our athletic component,” Linkon said. “We’re a leadership organization, so lessons like that are ingrained in everything that we do.”

It’s a big part of the reason why after the tournament, all the teams took part in Sunday’s #We StandTogether Rally for Unity on the front steps of The J. The demonstration began shortly after another bomb threat was received at the Indianapolis JCC.

“Our teams had an opportunity to be on stage, representing their communities and their JCC’s, because every one of our communities have been under attack with threats,” Linkon said. “This is something that touches all of our hearts.”

The squads at the tournament were made up of players from eighth to 12th grade. Many have been practicing every weekend since the beginning of the year. While this event is for boys only, there are also plenty of girls involved, cheering on their respective teams.

“For the people who come here, obviously there is a sense of competition, but it is in total friendship,” says former Regional Director Laina Meyerowitz. “It is fun to decompress from your regular schedule at school, and with those people you see every day. So we’re thankful that we get to come together like this every once in a while.”