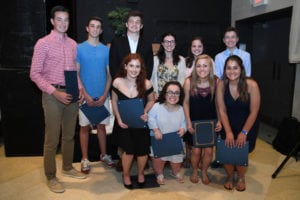 The Jewish Community of Louisville honored some of its leading figures at its 10th Annual Meeting on May 29.
The meeting, which is meant to “celebrate the work we do together,” according to JCL Chairman Jon Fleischaker, recognized 11 teen leaders from the past year as well as seven young adult and senior community figures, and one corporate sponsor who has made a significant difference in Jewish Louisville.
It was an “active year,” Fleischaker said, as he paid tribute to all the honorees, as well as the JCL staff, volunteers and board members.
This year, “There was a positive vibe in the board meetings,” he said.
Singled out for their work were this year’s campaign chairs, Jerry and Madeline Abramson and Ariel and Faina Kronenberg. The Abramsons are stepping down from the job, but the Kronenbergs will return next year with new co-chairs to lead the 2018-19 campaign.
In speaking for all four campaign chairs, Jerry Abramson referenced the declaration Jews make at the end of each book of the Torah: Chazak, chazak v’nitchazek. (Be strong, be strong and may we be strengthened).
“That’s exactly what this community is about,” he said.
JCL President and CEO Sara Klein Wagner said this year’s campaign drew more than 100 new donors, and 46 percent of this year’s contributors were either new or had increased their gifts over the previous year.
The 11 teen leaders were recognized for their service to AZA, BBG, their schools or the community at large. They were: Abigail Geller (Joseph Fink Community Service Scholarship); Ava Schumacher and Drew Goldstein (Ellen Faye Garmon Award); Elizabeth Hemmer and Emily Renco (Stacy Marks Nisenbaum Award); Tovah Frockt, Jacob Ioffe, Lucy Calderon and Julia Bessen (Stuart Pressma Student Leadership Development Awards); and Alan Ocheretner and Bennett Schramko (Tony Levitan Awards);
For young adult leaders, Dr. Ian Mutchnick accepted the Julie E. Linker Community Relations Young Leadership Award for his work on the Jewish Community Relations Council.
A neurosurgeon who volunteers his time for the Palestine Children’s Relief Fund, treating kids at clinics inside the West Bank and Gaza, Mutchnick said his love for Israel doesn’t negate his empathy for the Palestinians.
“For real peace, I believe, we must encourage understanding of different ways truth is lived in our conflict,” he said. “While this may require appreciating our own truths in a new light, I do not believe it means we need to abandon our truths of redemption, re-establishment and rejuvenation.
“It may also be,” he added, “that we come to better appreciate a truth we all share: the dream of peace and security for our children.”
Shannon Benovitz accepted the Joseph J. Kaplan Young Leadership Award in the name of her father, Jay Levine.
A mother who worries about the future for her children, Benovitz urged all in attendance to build up Jewish Louisville in ways that speak to today’s Jews.
“We have to remember that just because we’ve always done something in a certain way,” she said, “doesn’t mean there isn’t a different way it can be done.”
Craig Greenberg, recipient of this year’s Lewis W. Cole Memorial Young Leadership Award, credited the Louisville Jewish community for “enriching” his life.
In a video acceptance speech, he encouraged young leaders not to “replicate” the community in which they grew up, but to “build new, exciting and enriching opportunities.”
Among other recipients, U.S. Rep. John Yarmuth accepted the Blanche B. Ottenheimer Award also by video.
“The values that drove Blanche Ottenheimer are the same that were taught to me in my Jewish education,” he said.
Martha Bennett, an “active listener with a welcoming hug,” won the Elsie P. Judah Memorial Award, for her work at the Senior Adult Center.
“I’ve met a lot of people, and I continue to meet more all the time,” she said.
Jake Wishnia, recipient of the Ronald & Marie Abrams Volunteer of the Year Award, thanked the Abrams family for supporting the honor and recognizing people like him for “really just living like they were raised to do.”
A lifelong fundraiser, Wishnia said he always feels comfortable calling people for their annual pledges. He even used his remarks to urge anyone in the audience who had not yet made a pledge to do so.
Norma Cahen, Early childhood director of The J, accepted the Arthur S. Kling Award award, which recognizes community professionals
“Early childhood educators want the same thing for our young children as Mr. Kling wanted for seniors,” Cahen said, “a compassionate and safe environment where living and learning are valued.”
She accepted the award for the entire learning community – parents, children, teachers.
Finally, Kate Shapira Latts, vice president of marketing for Heaven Hill Brands, accepted the Corporate Friend Award for her company, toasting all the night’s awardees with a shot a bourbon.
This year’s program moved more quickly than last year – a result of shorter speeches and a reorganized schedule. Also, JCL President Wagner chose not to give an address, referring the crowd to a printed annual meeting update at each of their seats.
Still, she said the printed update could tell only so much.
“Numbers on a piece of paper could never sum up the connections and interactions we’ve had with people over the past year,” she said.

Two Kentucky school teachers who have made major, though different, contributions to Holocaust education in the state, will travel together to Poland this summer to see the scenes of the genocide for themselves. Ron Skillern, who teaches Holocaust studies at …

Do you remember when you moved into your first apartment away from your parents, or when you first walked into your new house? When Duby and I returned to Louisville and moved into our house, it was quite the adjustment …