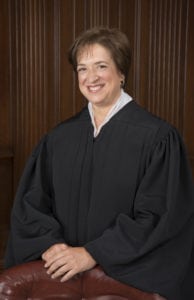 Associate Justice Elena Kagan traces her seat on the Court directly to Justice Louis D. Brandeis, the first Jewish member of the Supreme Court. On September 15, Justice Kagan will receive the Brandeis Medal. It is particularly significant that she will receive the Medal in 2016, which is the 100th anniversary of the appointment of Justice Brandeis to the Supreme Court.

The life work of Justice Kagan reflects shared values with Justice Brandeis even before she became a member of the Court. Having clerked for Justice Thurgood Marshall, she was aware of the Brandeis Brief technique used by then attorney Thurgood Marshall in the NAACP cases leading to Brown v. Board of Education. She also shares with Justice Brandeis an appreciation of the value of legal education and careful thought and attention to First Amendment speech regulation. Like Justice Brandeis, she has been praised for her eloquent judicial opinions.

In a 2010 article in the Baltimore Jewish Times, “Justice and the Jewish Seat,” the role of Justice Kagan on the bench is noted. The article highlighted the contrast in the nomination process between Brandeis and Kagan. Unlike Brandeis, who was the first Jew to be appointed to the Supreme Court, Justice Kagan joined Justice Ginsburg and Justice Breyer, to be the third Jewish justice on the current Court. If the nomination of Merrick Garland is approved, he would become the fourth Jewish member of the current Court. The Baltimore Jewish Times article recounted that Justice Kagan, who grew up in the Upper West Side of New York, wanted a bat mitzvah at a time when that was not available in the Orthodox shul that her family attended. She was, however, allowed to read from the Book of Ruth, and analyzed it in a speech.

Justice Kagan’s successful career includes serving as dean of Harvard Law School, and associate counsel to President Bill Clinton and later deputy assistant to the president for domestic policy. In 2009 President Obama nominated her to be solicitor general of the United States, and then a year later to serve on the Supreme Court. David Dalin, who spoke at the JCC in April, recounts the presence of Jews on the Court in his forthcoming book, The Jewish Justices of the Supreme Court From Brandeis to Kagan: Their Lives and Legacies (Brandeis University Press 2017).

Justice Kagan will receive the Brandeis Medal at a dinner at the Seelbach Hotel. She will also engage in a conversation about a range of issues. The reception is at 5:30 p.m., with the program beginning at 6:30. The cost for the dinner and presentation is $100. Seating is limited. Advance registration is required, and early registration is encouraged. To register, visit louisville.edu/law/events/event-registration.

The City of Louisville takes pride in being a compassionate city, a warm and welcoming place that immigrants from around the world and their descendents call home and where they can share and take pride in their heritage. To showcase …

On Sunday, August 21, Louisville BBYO held elections for their Fall/Winter 2016 Term. The teens gathered together by chapter, and elected an incredible group of leaders who will work in unison to run the chapter meetings, hold chapter events and …

The Jewish Community of Louisville is the largest Jewish agency in our community. In addition to raising money for all of Louisville’s Jewish agencies, it provides many unique and vital services for community members, from the Early Learning Center and …