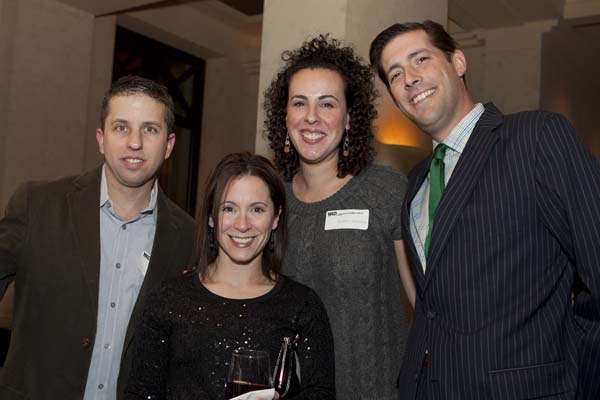 Close to 100 members of the JCL’s Young Adult Division (YAD)braved a bitterly cold night to come out and show support for the JCL and make their pledge to the Annual Campaign. The event was held at Vincenzo’s on Saturday, January 8, and featured poet/performer Vanessa Hidary, who traveled from New York for the occasion.

Hidary (a.k.a. the “Hebrew Mamita”) shared her insights about current topics such as interfaith marriage, racism and non-Jewish portrayals of Jews. Seth and Heather Gladstein, chairs of this year’s event, knew immediately that it was a success. Seth emphasized that he wanted attendees to have fun as well as to mingle and network – and they did. The Gladsteins said they received immediate feedback that participants enjoyed the new layout of the program.

“It is quite telling that people stayed after the speaker to continue spending time together,” said Seth. “In the past, people tended to leave as soon as the speaker was finished.” Heather added that she is looking forward to more successful YAD programs this year and hopes this first event was “indicative of the attendance we can expect at all activities.”


Their comments were echoed by YAD Co-Chair Jennifer Leibson, who was pleased that Hidary’s provocative performance “left people talking long after the program was over.” YAD co-chair David Kaplan shared his excitement about the event. “Seth and Heather did a masterful job,” he said, “putting on an event that made good on our promise to change things up within the Young Adult Division. By bringing in a high-quality Jewish artist and entertainer who was both funny and thought-provoking, they allowed YAD members to come together for an event that was meaningful and fun. We are always looking for new ways to make connections to our campaign donors, and our event chairs deserve kudos for raising this year’s event to a new level.

“Jennifer and I want to thank all the staff and volunteers who made this year’s YAD event such a success. And most of all, we want to thank our many donors who spent this Saturday evening coming together with other young JCL members to help build and sustain our Jewish community.”

The chairs agreed on the importance of donating to the Annual Campaign and emphasized the impact that Campaign has on programs in our local community such as The PJ Library and Teen Connection, and on agencies such as the Jewish Community Center and Jewish Family & Career Services. Our funding provides for our Partnership with Israel region in the Western Galilee as well as for Jewish communities in Eastern Europe.

To date, YAD members in attendance pledged $44,656 to the Campaign. If you would like to pledge to the 2011 JCL Annual Campaign, contact Tzivia Levin at 451-8840 or tlevin@jewishlouisville.org.