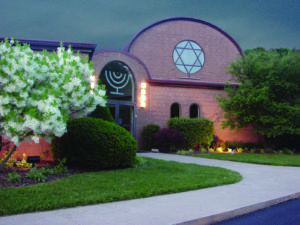 Most Louisville synagogues are staying closed for now.

Anshei Sfard became the first Louisville synagogue to reopen after two months of closure to stem the spread of the coronavirus. The rest are staying closed for now.
Anshei Sfard reopened for worship on Shavuot starting at  at 9 a.m., Friday, May 29, at Shalom Towers. Minyans are be capped at 16. There will be no kiddush, and worshippers must wear masks, stay at least six feet apart and preferably bring their own prayer books.
Its classes continue to be held online for now.
Anshei Sfard had planned to reopen on May 23, but following an Orthodox Union webinar with Dr. Anthony Fauci, the OU asked its members to stay closed a little longer.
Rabbi Simcha Snaid of Anshei Sfard said the reopening is being done in phases. In phase one, older worshippers are still being asked to stay home.
“I have an older congregation and they have been told not to come until we make it to a different phase, where things are safer for them to come out,” Snaid said. “I have also told my shul that anyone who does not feel comfortable in coming for any reason should not come.”
The main difference between phases one and two, Snaid said, will be the size of the minyan. He added that these decisions are based on guidelines from the OU and Agudath Israel America.
Anshei Sfard isn’t alone. Many Orthodox synagogues are about to reopen; some, particularly in the New York area, already have.
The closure has been especially difficult for Orthodox congregations, which, unlike other movements, believe they are halachically prohibited from streaming services on Shabbat. They also believe that a virtual minyan does not replace the halachic requirement of at least 10 men to read from the Torah.
“We can’t read the Torah and do Zoom streaming on the computer for our services,” said Davis, president of Anshei Sfard. “We have to get together or individually daven (pray).”
The Beshear administration has released guidelines for reopening houses of worship, though first among these points is to encourage the continuation of “alternative services.”
Most Louisville synagogues are doing just that, and many have reported attendance surges for their virtual services and programs.
“Until doctors tell us there’s a minimal risk and it would be unlikely for people to be harmed, we’re just not going to do it (reopen),” said Rabbi Robert Slosberg of Adath Jeshurun.
Even if AJ reopened, and all the worshippers appeared healthy, he said, one asymptomatic member could still infect an entire minyan.
“You could even take their temperature and they would be normal,” Slosberg said, “but they’d be infected. Then the whole place gets it. This is a very infectious disease.”
The Temple has sent a message to its congregants that they are preparing for an eventual reopening, though it is staying closed for now.
“We’ve been working on an updated strategy ever since the governor posted the new guidelines,” said The Temple President Reed Weinberg. “We’re going to continue zooming and streaming all services and activities right now. We might consider having a limited number of people in the building, but nothing is finalized until we have a multi-step plan.”
Early in the pandemic, The Temple did stream services from its building with just the rabbi and a couple of participants on the bima, but it has moved away from that model.
“At this time, we’re not allowing people into the building,” Weinberg said. “Before, you would let a person sit on the bima to light the candles or say kiddush. Now, they’re just zooming those people in.”
The rabbi and music leaders still gather in the same space, he added.
Temple Shalom and Keneseth Israel have also confirmed they will not open right away. KI Executive Director Yonatan Yussman said his congregation is following CDC and Rabbinical Assembly guidelines as it considers its final decision.
Chabad Rabbi Avrohom Litvin said he misses the “fellowship” of actual services, but the need for prayer has not diminished.
“During times of crisis,” he said, “there is a different way to connect to God, which is through private prayer.”

Following Gov. Andy Beshear’s announcement that houses of worship could resume services on May 20 under phase one of his reopening plan, Anshei Sfard was prepared to do just that. The congregation had planned to hold a Shabbat service at …

A Jewish Louisville theatrical director, and his colleagues from around the country, are making Jewish-themed dramatic readings available to the public during the coronavirus pandemic. David Chack, of the ShPIeL Performing Identity, is also a member of Executive Board of …