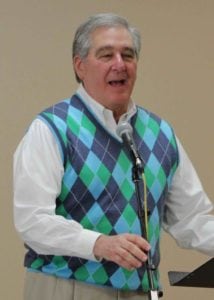 Going back to the Reagan administration, Abramson, 70, the mayor of Louisville for 21 years, learned that White House directors whose offices were in the West Wing, where 40-45 staffers worked, were physically and figuratively closer to the power than the 900-1,000 employees across the street in the Executive Office Building.

Fortunately for Abramson, fresh from a stint in the Obama administration, his office was on the second floor of the West Wing, a short walk to the Oval Office, and the Louisville native played a role in many of the domestic achievements of the Obama years.

“It was a great experience. I learned a lot; I hope I helped out a little bit,” Abramson said Sunday, speaking to some 90 people at a Temple Shalom Men’s Club breakfast, “but it is sure nice to be home.”

Abramson, who spent two years as White House Director of Intergovernmental Affairs, spent much of his 40-minute talk sharing anecdotes from his time working for President Obama.

But he got political, too.

Were TPP to take effect, Abramson said, some 18,000 tariffs “would come down completely, so we would have a level playing field to compete.”

To put that terms Kentucky understands, “if you’re in the bourbon business, and you want to export bourbon to Vietnam, it has a 72 percent tariff on it,” he said.

The agreement also set limits on smoke stack emissions and restrictions on child labor — things he said China, which competes with the United States on an economic level, doesn’t care about.

Not only was it a chance to increase trade, “we would set standards for trade for the next generation — not the Chinese,” Abramson said. “With us stepping back, China is stepping in, no standards whatsoever, all bets are off.”

Abramson discussed his role in several domestic issues. He said the White House decided to “pivot” to state governments when Congress blocked much of Obama’s agenda. By working with governors and state legislators, he said parts of the president’s proposals were enacted at the state level.

Gen I is a Native American youth initiative pushed by Obama after he visited a Sioux reservation in North Dakota in 2014 and hearing firsthand about the problems its young people faced. It focuses on helping Native youth overcome barriers to succeed in life.

Part of Abramson’s job was to liaison with Native American tribes. There are 556 tribes in the United States, he learned, few of which earn money through casino revenue.

“The reality is there’s about 20 tribes that have casinos, maybe 25,” he said. “All the rest have great difficulty on their reservations — incredible health care issues, incredible suicide rates, incredible alcoholism, drugs, etc.”

Since returning to Louisville, Abramson has been teaching leadership and civics at Bellarmine University. There, he will also develop and direct a new institute for local government leadership, which will train elected officials from across the nation.

He also plans to work with the National League of Cities and the National Association of Counties to develop seminars for elected officials that will take place at Bellarmine.

The great Talmudic sage Hillel was born in Babylonia in the first century B.C.E. As a young man, he came to the Holy Land to study Torah at the feet of the sages of Jerusalem. An impoverished, but brilliant, student, he eventually became a famous …