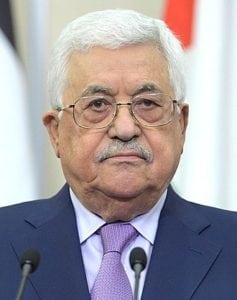 Palestinian Authority President Mahmoud Abbas apologized to Jewish people offended by his recent speech in which he blamed the Holocaust on Jews.
“If people were offended by my statement in front of the [Palestinian National Council], especially people of the Jewish faith, I apologize to them,” Abbas said in a statement sent Friday by his office.
“I would like to assure everyone that it was not my intention to do so, and to reiterate my full respect for the Jewish faith, as well as other monotheistic faiths,” he said.
Abbas, who has long been accused of Holocaust denial for his doctoral thesis claiming secret ties between Zionists and the Nazis, also condemned the Holocaust “as the most heinous crime in history.”
“Likewise, we condemn anti-Semitism in all its forms, and confirm our commitment to the two-state solution, and to live side by side in peace and security,” he said.
Abbas’ remarks drew an unusual burst of condemnation even from those who once considered him a moderate who could lead Palestinians back to the negotiating table. In an editorial Wednesday, The New York Times called for new leadership for the Palestinian Authority, writing that Abbas “shed all credibility as a trustworthy partner if the Palestinians and Israelis ever again have the nerve to try negotiations.”
His speech has been criticized as anti-Semitic by political figures in Israel, including Prime Minister Benjamin Netanyahu, as well as U.S. Ambassador to Israel David Friedman, the European Union and Germany, among others.
Speaking April 30 in Ramallah, Abbas told the Palestinian National Council: “From the 11th century until the Holocaust that took place in Germany, those Jews who moved to Western and Eastern Europe were subjected to a massacre every 10 to 15 years.”
This “anti-Jewish [sentiment] was not because of their religion,” he said, “but because of their function in society, which had to do with usury, banks, and so on.”
In the introduction to his 1984 book titled “The Other Aspect: The Secret Ties Between the Nazis and the Leadership of the Zionist Movement,” Abbas wrote about the figure of 6 million Jews killed in the Holocaust: “In truth, no one can refute or confirm this number. In other words, the number of Jewish victims could be six million and could be much smaller — even less than one million.”
He added this “does not reduce from the severity” of Nazi crimes. In that book, which is based on his doctoral thesis from 1982 for the Moscow Oriental Studies Institute, Abbas also accused the Zionist leadership of complicity in the Holocaust, which he says Zionists saw as a vehicle for increasing Jewish immigration into what was then the British Mandate over Palestine.