For the last 24 years, Slava Nelson has been part of the staff at The J. With a ready smile and a sparkle in her eyes, 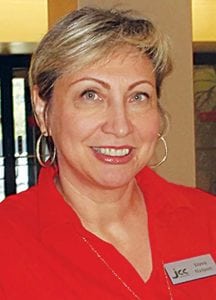 she welcomed everyone with whom she came in contact. With enthusiasm, energy and creativity, Nelson planned programs and made sure they were successful.

Now, Nelson is beginning a new chapter of her life. Her final day at The J was June 17, and the love she inspires was evident as the Senior Adult Lounge was packed with many of those whose lives she touched over the years – seniors, friends and colleagues – and there were several emotional tributes and parting gifts.
“You know I’m mad at you” for leaving the J, Margot Kling said, half joking, as she delivered the formal thank you and presentation from the seniors that included a magnificent chanukiah (Chanukah menorah).

JCL President and CEO Sara Klein Wagner also thanked Nelson and gave her a gift. Wagner recalled how Nelson, herself an immigrant from the former Soviet Union (FSU), did so much to welcome the new Americans to Louisville and move them from being immigrants to becoming U.S. citizens. She also praised Nelson for her dedication to The J and the community and the many programs and trips she created and led.

Slava arrived in Louisville in 1991 and her life as an American unfolded “right in front of this community’s eyes,” she said. “It was absolutely a blessing and an amazing opportunity to start working here.”

“I took the greatest pride in saying aloud that I work at the Jewish Community Center,” she said. “It’s been a privilege to work with thousands and thousands of people,” she added, “and it’s nice to hear that I touched their lives in a good way.”

Nelson worked at The J in many capacities. She began in the newly-created position of part-time acculturation director even before The J defined what was expected of her. “They only knew it was absolutely necessary to help the new Americans understand a new way of life” and Nelson was charged with explaining it to them.

This part-time position was only supposed to last for one year, she explained, “but after eight months, they absolutely offered me full time. They told me that I did a great job and they would like me to continue for the next 10 years.”

During that 10 year period, Nelson helped many people become American citizens, and she regards helping seniors attain that goal as her greatest achievement.

In fact the Louisville Jewish community welcomed so many immigrants from the FSU that at the time, they made up 10 percent of our community, and Nelson worked with most of them.

Nelson proved to be such an asset for The J that when the need for an acculturation director dwindled, the agency gave her a new job working with Diane Sadle and the older adults. “Through the years,” Nelson said, “Diane Sadle, who is the kindest and the most caring person I have ever known, became a close friend and I will always cherish the memories that we created together while working with our precious seniors.

“My most kind words go to Margot Kling, Senior Adult committee members and volunteers, who were my inspiration through the years,” she continued. “Thank you for your loving hearts and wisdom.”

In the Senior Adult Department, Nelson oversaw an exponential growth of senior programming that included many trips to places including Gatlinburg, Chicago, Washington, Atlanta and very recently to Branson MO. (See story in Centerpiece.)

Three years ago, Nelson began working with the Patio Gallery, which she helped to expand. She also started planning cultural arts classes and programs, which she really enjoyed. “ I am so grateful for the opportunity to work with Bette Levy, who introduced me to the artist community. Working with such amazing talents really enriched me a lot. I am proud to share the great success of the recently launched J-Arts and Ideas programs with the exceptional talent of John Leffert, who directs the Arts & Ideas Department.”

Throughout her tenure, she has enjoyed putting her skills to work for the Jewish community and infusing all her activities with enthusiasm and love. She is grateful to all those she worked with and helped over the years and for the opportunity to touch so many people.

“I also want to thank all my beautiful and wonderful colleagues for supporting me through the years,” Nelson continued, “one of whom deserves very special recognition and always will have a special place in my heart – Marsha Bornstein – my friend, my mentor and my older sister that I never had, who has been there for me for 24 years, who lifted me high in good time and has been my savior when my life has been very tough.

“Again I would like to thank this amazing J-team for helping me grow professionally and building my life here as my career progressed,” she added. “I wish you all great success and luck in your future endeavors.”

Outside of The J, Nelson takes great pride in her son, Dmitry Nedelin, who came to this country as an eight-year-old child and today is a major in the U.S. Air Force. Nedelin and his wife, Alisha, have given Nelson and her husband, John, two grandchildren, Alex and Emma.

While Nelson will no longer be working at The J, and she has said good-bye, but she also says, “I will see you around.”

The 12th Annual Republic Bank Players Challenge was held on Monday, June 20, at the Standard Club on a gorgeous warm and sunny day. The day was jam-packed with fun and games for the event, which benefited Jewish Family & …

Congregation Anshei Sfard has deep roots in Louisville. Established in the late 1800’s, the congregation has always been an Orthodox congregation, and in recent years has been the community’s Orthodox mainstay. Today, very few Louisville families identify as Orthodox and …

Ronda Christine Allgeier Gordon was a courageous person. For eight and a half years, she battled cancer, but her zest for life meant that she continued to live life to its fullest. “She was just 50 when she died,” her …