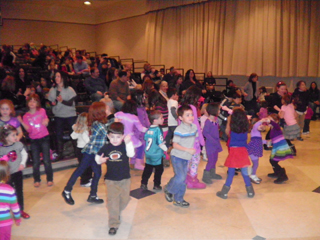 Approximately 200 parents and children from the Louisville community enjoyed an afternoon of music and dancing with Justin Roberts and the Not Ready for Naptime Players on Sunday, January 9, at the Jewish Community Center.

The group played songs from their Grammy nominated CD, Jungle Gym, which included the song “We Go Duck”.  Justin Roberts, Gerald Dowd and Liam Davis taught the children a variation of the game, “Duck Duck Goose” which can be played with just one person and includes patting your head when the word “Duck” is said and screaming and running in place when the word “Goose” is heard in the song.

Kristin Shapira, one of the event co-chairs says, “The concert was a huge success.  Justin was such a great performer–he had both the kids and parents on their feet dancing.” 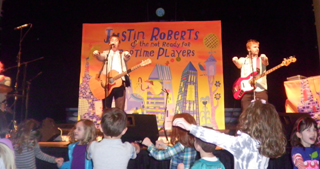 The concert was a fundraiser for the Jewish Community of Louisville programs, The PJ Library and PJ Plus, which provide Jewish based programming for kids.  In addition, new and gently used books were collected at the concert to be donated to Kosair Children’s Hospital.

Attendees delighted in delicious treats sold by Najla’s. Her wonderful baked goods will be sold year-round at the new Java Brewing Company opening January 17 in the JCC lobby.

The JCL children’s department and The PJ Library look forward to more exciting programs, throughout the year.  To sign up for updates or programs contact Julie Hollander 238-2708 or Allison Schwartz 618-5325 or visit the PJ Library and PJ Plus webpages.