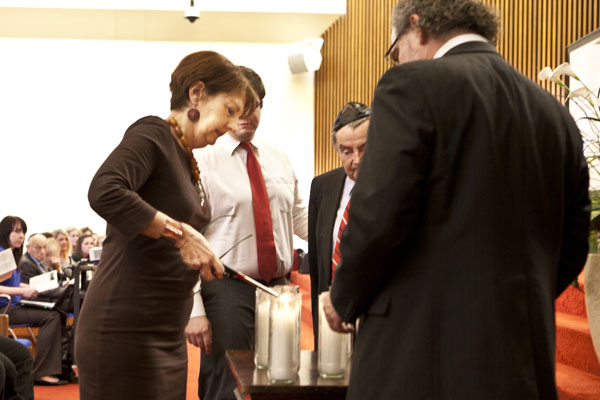 Terezin was a Nazi concentration camp. Yet it was different from the other camps. It was the place where the Nazis sent artists and musicians. Some children were permitted to live there, and when the Red Cross came to inspect the living conditions in the camps, Terezin is where the Nazis brought them.

That is not to say living in Terezin was wonderful or even good. Even within the camp there was a public face where the Nazis presented their charade for the Red Cross, and then there was the rest of the camp.

There is, however, a connection among children – whether they were interned in Terezin during the Holocaust or are living in Louisville, KY, today. The art and the poetry, the stories and the music forge a link that transcends time.

Now, more than 60 years have passed since the Holocaust ended, and each year, fewer survivors remain who are able and willing to share their stories. This year’s program was dedicated to the memory of Holocaust survivor and beloved educator Ann Klein, who passed away in February.

Going forward, more and more, it is up to the children – the students of Holocaust educators – to carry the memories forward.

So, this year, when the Jewish Community of Louisville and its Jewish Community Relations Council planned their annual community-wide Holocaust commemoration, they decided to focus on the next generation. They sought to tap into that link and presented “Through Children’s Eyes.”

Of all the works that survived Terezin, perhaps the best known is Pavel Friedman’s poem, “I Never Saw Another Butterfly,” and the collection of children’s poems, stories and drawings created in Terezin and published after the war in a book bearing the same name.

That book inspired Celeste Rasplantl to create a one-person play, also bearing the same name. And that play touched Audrey Nussbaum, who chose it as her performance piece at Kentucky Country Day School and shared it with the several hundred people who filled the main sanctuary at The Temple on Wednesday, April 18, for the Yom HaShoah program. 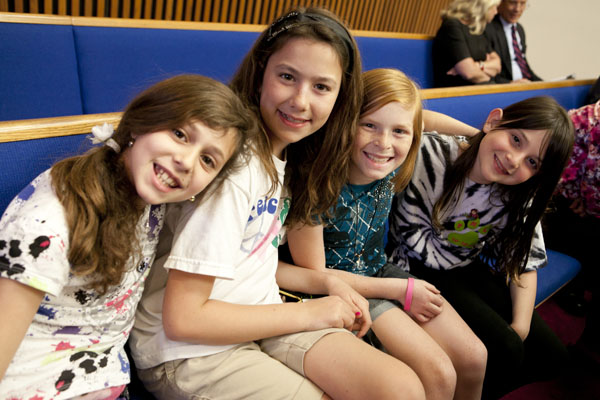 It was the children whose voices told most of the story this year – students from St. Francis of Assisi Middle School, Atherton High School, Kentucky Country Day, The Temple Hebrew School, Louisville Beit Sefer Yachad and the Louisville Youth Choir.

They called on Holocaust survivors and educators and the spouses and children of Holocaust survivors who are no longer with us to light the 11 memorial candles – each one representing a group targeted by the Nazis – six million Jews and five million others. The children identified each group through “Let Us Remember,” a reading that has become a tradition in Louisville, while the relatives Louisvillians lost during the Holocaust were remembered as their names were projected for all to see.

“Nizkor … We will not forget,” the congregation responded 11 times.

It  was the children of the Louisville Youth Choir whose pure, sweet voices touched hearts with songs like Joan Varner’s “When I Am Silent” and “Inscription of Hope,” which was compiled from fragments of Jewish text, believed to have been written by a child, found on a cellar wall in Cologne, Germany, during World War II.

It was children who shared poetry left behind in Terezin and introduced each element of the program, providing context and understanding.

A display paying tribute to the victims of the Holocaust was on display in the entryway.

Gila Glattstein contributed to the display.

The program was sponsored by the Jewish Community of Louisville’s Jewish Community Relations Council, and JCRC Director Matt Goldberg coordinated the program. David Klein is JCL chair and Ayala Golding is JCRC chair.

On Sunday, April 15, Berlin 36, the film about the true story of the 1936 Berlin Olympics and Jewish high jumper Gretel Bergmann was shown at the Village 8 Theaters. As she did when the film was shown in the Jewish Film Festival in February, Ann Dorzback, Bergmann’s cousin, spoke following the movie.

Congregation Keneseth Israel, which calls itself Louisville’s Landmark Synagogue, had the first of its 12 stained glass windows reinstalled on April 17. The window was removed three months ago for repair, refurbishment and restoration, using 21st century technologies. Forty-one years …

National Council of Jewish Women, Louisville Section, will have its closing meeting and luncheon on Wednesday, May 16, at 11:30 a.m. at Rivue Restaruant in the Galt House Hotel. The guest speaker will be Judith B. Van Ginkel, Ph.D., author …