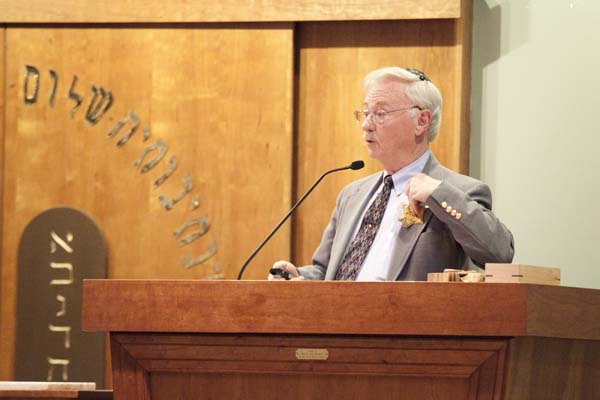 On Monday, May 2, several hundred members of the Louisville community gathered at Temple Shalom for the Jewish Community of Louisville’s annual Yom HaShoah Commemoration, where they heard about these kinds of stars from keynote speaker Dr. Henry Fenichel and others.

After Matt and Kathy Karr set the tone for the evening with bassoon and flute duets, this year’s program began with the lighting of 11 candles, each representing one million people – 6 million Jews, including 1.5 million children, and 5 million political activists, resistance fighters, martyrs, civilians in the countries overrun by Hitler’s troops, those who opposed the Nazis, homosexuals, gypsies, the mentally ill and the righteous gentiles – slain by the Nazis during the Holocaust. 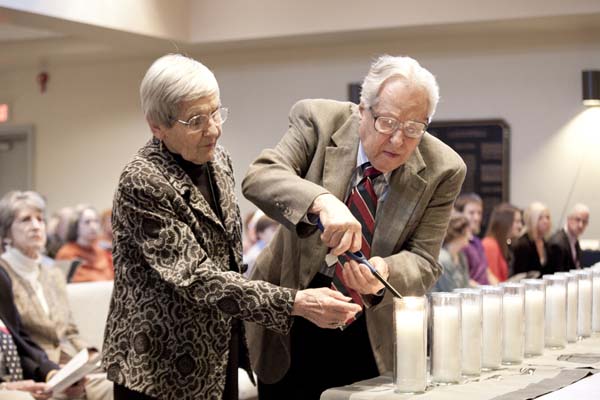 The candle lighters were survivors and liberators and their loved ones and those who teach the lessons of the Holocaust to the next generation: Ann and Sandor Klein, Donald and Madilyn Guss, Dan Streit, Fred Whittaker, Gila Glattstein, Esther and Melvin Goldfarb, Renee and John Rothschild, Thelma Marx and Sharon Davis (in memory of husband and father, Holocaust survivor and educator Ernie Marx), Dan Penner, Helene Banks, Dr. Fenichel and Abe Jakubowicz.

With Jeff Klepper’s setting of the Hannah Sennesh poem, “Yesh Kochavim,” Keneseth Israel’s Cantor Sharon Hordes shifted the focus from candles to stars. “There are stars up above,” she sang, “so far away we only see their light long, long after the star itself is gone. And so it is with people that we loved. Their memories keep shining ever brightly though their time with us is done.”

As Temple Shalom’s Rabbi Stanley Miles introduced Dr. Fenichel, he noted that the the community is depending on the students who lit the candles to start the program to be the “memory carriers” for the 6 million into the future. However, 6 million is a number we can’t comprehend. It is the stories of the individuals that need to be heard, because it is those stories that will be carried forward. 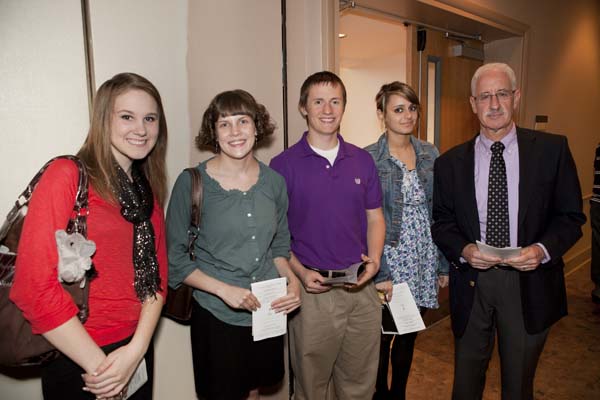 When the Nazis invaded the Netherlands, he explained, they first took over the police, then they began a slow and meticulous process of dehumanizing the Jews.

All Dutch citizens were soon issued new ID papers. A large J was stamped on Jews’ documents. For five-year-old Henry, who was proud to be Jewish, this was just fine. And when Jews were required to wear yellow stars emblazoned with the word “Jood,” that, too, he regarded as a badge of honor, unaware that it was part of the Nazi program to dehumanize the Jews.

The Nazi program continued, and soon Jews weren’t allowed to go to school.

Step by step, the restrictions mounted. Two years after the invasion, the Nazis began rounding up men. The change had been so gradual, that Fenichel observed, even that seemed reasonable. The invading forces would certainly need slave labor to produce the supplies they needed.

When Nazis began rounding up families – the very old, women and children as well as men – the Fenichel family recognized the danger and, with the help of their Christian neighbors in The Hague, they went into hiding. For six months or a little longer, the family found safety in a convalescent home.

Then, like many others, they were found and taken to Westerbork in the northeastern section of The Netherlands, near the German border. Fenichel described Westerbork as a detention camp that was run internally like a ghetto by Jews. The main difference was that every Tuesday, the Jewish leaders had to provide the Nazis with a list of 1,000 names of people who would then be loaded on trains and taken away to other camps.

Rabbi Dasberg, his family and Yoya were also in Westerbork. The rabbi continued to minister to his constituents.
Although Yoya was a young boy, he was very talented. He made toys that delighted German soldiers could take home to their children, and so he survived. 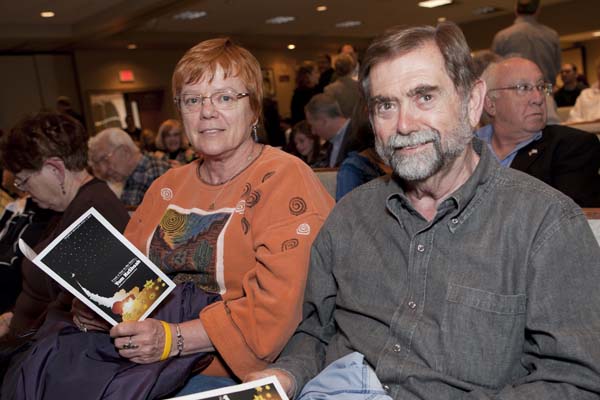 The Templers
At the same time this was happening in The Netherlands, a group of German Christians, dedicated to building communities in Palestine, was being singled out by the British, who held the U.N. protectorate over Palestine at the time. The British wanted to expel these Germans, known as Templers (different from the Catholic Templars).
Fortunately for the Fenichel family, the British and the Germans devised a plan to repatriate the Templers to Germany and Austria in exchange for some European Jews who would be brought to Palestine for “family reunification.”

Dr. Fenichel’s mother sent word to their Christian neighbors, and these friends were able to send them the family’s identification papers and a copy of his parents’ earlier application for emigration to Palestine. These friends did not include a copy of the earlier British rejection of their application, so the Fenichels names were added to the list of people who might be included in the exchange.

Things moved slowly and deliberately in the Nazi world, and although the exchange list had been compiled, no action was taken for a very long time. The three families found themselves transported to Bergen-Belsen.

A Bar Mitzvah
In Bergen-Belsen, as Yoya approached the age of 13, Rabbi Dasberg asked him if he would like to study and have a bar mitzvah. Yoya agreed, so the pair arose at 4 a.m. each day to study before their labor began.

Finally the day came. Rabbi Dasberg had smuggled a four-inch Torah scroll into the camp, and Yoya read his portion. Following the ceremony, Rabbi Dasberg gave the scroll to Yoya, because as a younger person, it was more likely that he would survive and keep the scroll safe. 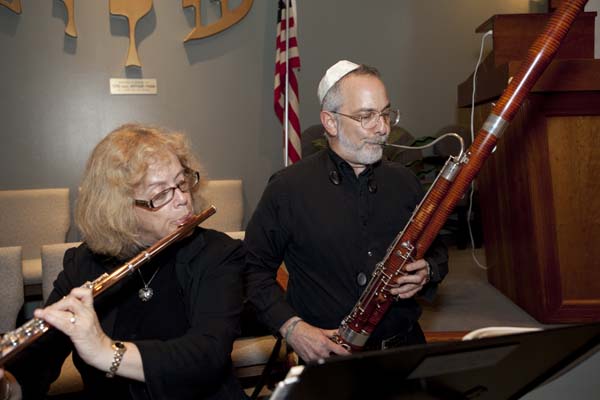 Once in Palestine, the family spent a couple of days in the Atlit Camp, but once they had been processed, they were issued new papers identifying them as Palestinian citizens and released.

The Jewish leadership then separated young Henry from his mother. She went to a kibbutz and he stayed at Neve Hayeled in Nahariya. He would visit her during his vacations from school, and she would visit him from time to time.

During Israel’s War of Independence, his mother traveled with the Haganah when they liberated Nahariya and remarried. After the war, things in Israel were difficult. Fenichel’s stepfather had family in the United States who told him the sidewalks were paved with gold, so the family came to this country.

The Space Connection
The majority of astronauts in the U.S. space program are Americans, but a small number of astronaut scientists from other countries have been allowed to join the program and do research.

During Bill Clinton’s presidency, Israel’s Ilan Ramon was invited to join. Ramon’s experiment was to study the effect of dust particles from the Sahara Desert on the Mediterranean Sea. That experiment had been designed by Yoya Joseph.

While Ramon was working with Joseph, he saw the small Torah Joseph had received at his bar mitzvah in Bergen-Belsen. Ramon’s mother was also a survivor. The astronaut was touched by Joseph’s story and asked to take the Torah up into space with him.

Ramon was already a star – an Israeli hero. He was the youngest pilot who participated in the mission that destroyed Saddam Hussein’s nuclear reactor. Joseph gave his permission.

Ramon took the Torah into space and during a press conference from the space shuttle Challenger, the small scroll was visible.

Then tragedy struck. Challenger never made it back to earth and all its crew perished. The Torah was lost, too. 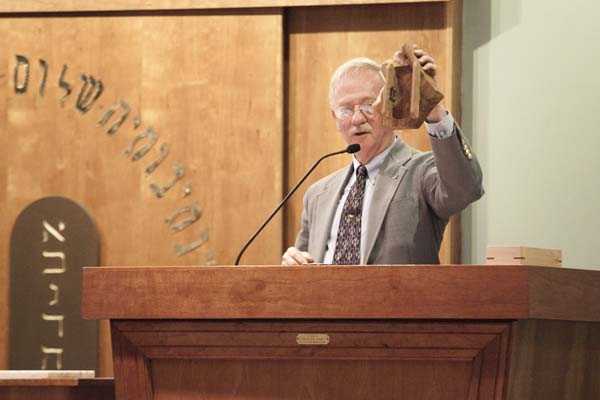 The Connection
Dr. Fenichel became a physics teacher at the University of Cincinnati and has since retired.

He also is involved in Holocaust education. At The Center for Holocaust and Humanity Education, he teaches teachers how to teach the Holocaust and serves on the Board.

Bar and bat mitzvah students in both Cincinnati and Netanya, Israel, used a program developed by the Center and culminated their studies with a teleconference.

On the appointed day, the students in Netanya were joined by Yoya Joseph; Rabbi Dasberg’s daughters, Dini and Fanny; and Rona Ramon, Ilan Ramon’s widow.

In Cincinnati, the students gathered at Hebrew Union College for the teleconference. They invited Dr. Fenichel to join them. He did, bringing along his own four-inch tall Torah scroll, identical to the one that had been destroyed on the Challenger.

When Rona Ramon saw the small scroll, she asked Dr. Fenichel if he would allow it to be taken into space. He agreed, and astronaut Steve MacLean took it with him on the space shuttle Atlantis.

Returning the Scroll
Upon MacLean’s safe completion of his mission, arrangements were made to return to scroll to Dr. Fenichel in Cincinnati, but those in Israel wanted something more. So a second ceremony was arranged at Weizmann Institute in Israel.

In a special surprise, Dr. Fenichel met Rabbi Dasberg’s grandson, Raphul Ben-Zeev, who made a small, unique ark for the tiny scroll out of a piece of olive wood.

Concluding the Program
As has become traditional with JCL Yom HaShoah Commemorations, Adath Jeshurun Cantor’s David Lipp chanted Eil Malei Rachamim and the names of family members Louisvillians lost in the Holocaust scrolled across a screen.

A rabbi from The Temple, Rabbi Gaylia Roks, introduced Elie Wiesel’s stirring version of the Mourner’s Kaddish, and Melvin Goldfarb led the community in its recitation.

Keneseth Israel’s Rabbi Joel Wasser brought the program to a close with a brief personal story about the photo of his great grandparents that he carries in his shirt pocket every Yom HaShoah. He was a shochet (ritual slaughterer) and she a Hebrew teacher who taught others how to daven (pray the service).

After the Holocaust, Rabbi Wasser explained, Emil Fackenheim taught there are now 614 commandments, the last being not to give Hitler a posthumous victory. The Holocaust can inspire us never to take our heritage for granted.