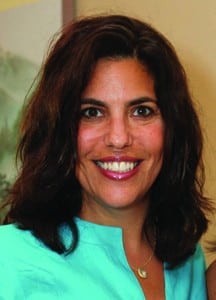 Jennifer Tuvlin, who has been serving as the JCC’s director of the PJ Library and Shalom Baby programs, is taking on a new responsibility – welcoming newcomers.

She views it as a natural outgrowth of her current responsibilities. “It’s engagement similar to PJ Library and Shalom Baby,” she said, but for a different group of people in the community.”

A number of years ago, Louisville used to have a program to welcome newcomers that brought people together for a big brunch and introduced them to the community and to some people. This time, Tuvlin is taking a different approach.

She began by researching what other communities are doing before deciding on the best way for Louisville to move forward.

Once a newcomer has been identified, Tuvlin plans to meet with that person individually, identify their needs and interests and connect them with people with the same needs and interests. For example, if the Jewish newcomer has children who will attend the public schools, Tuvlin will try to connect that person with another family with Jewish children around the same age who attend the public schools.

It’s not about pushing newcomers toward activities or synagogue memberships, but rather about providing information and making connections that will enable them “to become part of our quilt or patchwork” that is the fabric of our community.

If you know of a newcomer, you can help them learn more about Louisville’s Jewish community by referring them to Jennifer Tuvlin, 502-238-2719 or jtuvlin@jewishlouisville.org.

Each year, the Jewish Community of Louisville recognizes teens who have demonstrated exemplary leadership skills in BBYO throughout their high school experiences with the Stuart Pressma Leadership Development Awards. This year, Pressma Awards will go to Daniela Reuter, Michael Schwartz, …

(see event photos below) When I hear the words “Nothing Like a Dame,” the tune from one of my father’s old records runs through my head and continues, “nothing in the world. There ain’t nothing like a dame that is …

The JCC’s Early Learning Center Spring Sing has grown immensely in recent years. This year, funds raised in the auction and raffle have topped $7,500, which is a huge success, over $1,500 just two years ago. “The parent committee worked …