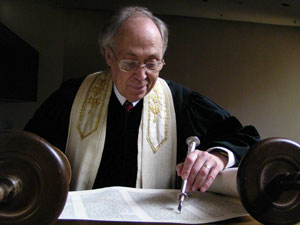 The Temple will honor Rabbi Chester B. Diamond on Sunday, June 5, with a “Diamond’s Diamond” celebration of his 75th birthday. The sixth annual Temple tribute dinner will begin at 6 p.m. at The Temple.

Rabbi Diamond, who has been rabbi emeritus since 2001, came to The Temple in 1963, the same year he was ordained. He earned his Bachelor of Hebrew Literature degree in 1960 from the Hebrew Union College-Jewish Institute of Religion in New York and his teaching certificate from the College-Institute School of Religious Education and the New York Federation of Reform Synagogues. He was ordained after receiving his Master of Arts in Hebrew Literature with honors. Having graduated first in his class, he was awarded a fellowship at the College-Institute in Cincinnati where he was a Graduate Fellow from 1963-1966.


In his years in Louisville, Rabbi Diamond has served on the executive boards of both Jewish and community organizations, including the Louisville Board of Rabbis and Cantors, Jewish Hospital, the Jewish Community Federation, the Boy Scouts of America, the National Conference of Christians and Jews, the American Jewish Committee, Council on Peacemaking, Senior House, the Jefferson Alcohol and Drug Abuse Center, the Louisville Free Public Library Foundation, Apple Patch Community for Mentally Handicapped Adults and the Louisville and Jefferson County Youth Orchestra. He is currently a member of Citizens for Better Judges. In addition, for several years he was a volunteer tutor in the reading program at Dunn Elementary School.

Rabbi Diamond was the first rabbi to serve on the Board of the Office of Ecumenism of the Louisville Archdiocese. In 1999, he was recognized by Interfaith Paths to Peace for his work in promoting interfaith understanding and in 2001 was the recipient of the Lifetime Achievement Award by the Cathedral Heritage Foundation.