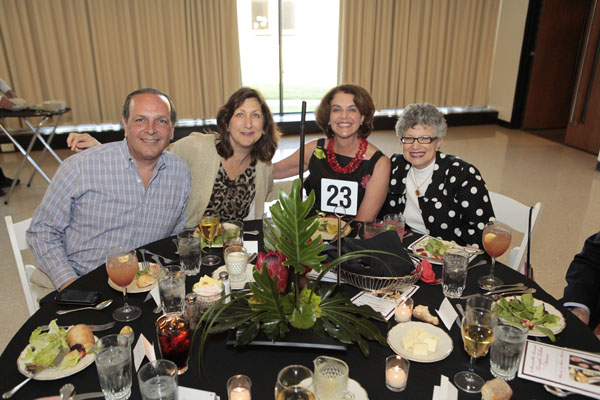 Ron and Marie Abrams have been leaders at The Temple and in the Louisville Jewish community throughout their lives. In recognition of their tremendous contributions, The Temple honored them at the Seventh Annual Temple Tribute Dinner on Sunday, June 3.

Louisville Mayor Greg Fischer started the evening off by proclaiming the day Ron and Marie Abrams Day in Louisville and recalling that he and Ron did financial business together and Marie was a life adviser for him. He said that they are “forever young in spirit.”

When the Abrams’ children, Beth Mitchell and Marc Abrams took the podium, they paid tribute to their parents with some tongue in cheek humor. For example, Marc described his mother as a “sweet, docile lady who tries to repair the world with the cry of a Banshee” but is really the “ultimate softy.”

Beth added that both Ron and Marie are “wonderful examples of service and compassion.” They “give and take with humor and love.”

Several others spoke in person or through a video presentation. Former University of Louisville President John Shumaker spoke about the Abrams’ service to the university and their commitment to education.

Rabbi Gaylia Rooks explained that the Abrams exemplify the three values cited in the precept “Al Shlosha D’varim” from Pirkei Avot. They value learning and teaching, they live a life of service to community and they are committed to acts of loving kindness, often evidenced in their commitment to social justice.

David Karem, for whom Marie worked when Karem was a senator in Frankfort, quipped, “I hired Marie so I could work for her.” During her time in the state capitol, Karem said, she became one of the most respected figures in Frankfort.

Marcia Roth called Marie her mentor, and said that when you disagree with Marie, she “talks slowly and you will know in the end that you will see eye to eye.”

Jerry Temes praised Ron’s contributions to the Jewish Hospital Board, and Laura Koby spoke of her lifelong friendship with Marie.

When the Abrams were called up to respond, Marie started by saying that she was “nearly at a loss for words, but ….” She and Ron thanked everyone for their kind words and support. Ron noted, “This community has give us so much we can never repay it.”

In addition to the dinner, the evening included a silent auction.

by Brian Kennedy A season on popular and classic musicals are in store for Centerstage’s 2012-2013 theatre season. During the 2012-13 production season, Centerstage will present Rent (July), Next to Normal (September), Ragtime: The Musical (Oct-Nov.), Company (Jan. 2013), Joseph …