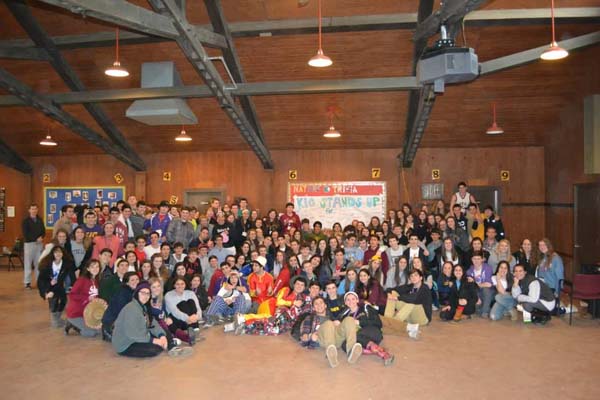 Forty-one members of Louisville BBYO attended KIO Kallah from March 7-9 at Camp Campbell Guard in Hamilton, OH. Kallah is an annual convention in the Kentucky-Indiana-Ohio Region where members of BBYO come together to explore their Jewish identity.

This year’s theme was “Where the Wild Things Are,” the children’s book by Maurice Sendak. Participants discovered that the term “wild things” in the book’s title is actually based on the Yiddish expression “vilde chaya” meaning “wild animals.”

The wild animals in the story represent caricatures of the author’s aunts and uncles, who were poor Jewish immigrants from Poland whose remaining family members were killed during the Holocaust. His relatives were unfamiliar and even slightly grotesque to the young author from Brooklyn as a child.

In keeping with the theme, the convention body heard from Conrad Weiner, the youngest living Holocaust survivor in Cincinnati. Weiner shared his story of being deported from Strorjinetz (a small town in what is now the Ukraine) to a labor camp in Transnistria when he was four. He was not transported by cattle car, but was forced to walk. He was liberated in 1946 and eventually immigrated to America 12 years later.

Rather that expanding on his struggles, Weiner focused on what he had done with his life after moving to America and inspired the KIO members to make the most out of their opportunities, encouraging them to stop ignorance and spread awareness.

Louisville is proud that Jacob Fink, a sophomore in Drew Corson AZA coordinated an amazing convention with Kelsey Bardach (a senior from Cincinnati) and that David Hemmer, Jessie Hymes, Becca Lustig and Jacob Lapin planned amazing programs on steering committee.

The theme for the weekend was “BBG Code,” based on the MTV show “Girl Code.” During this sleepover, the girls participated in a program for each of the six folds (sisterhood, creativity, recreation, Jewish heritage, community service, and social action).

Especially notable was the program for the community service fold: girls brought toys to be donated to Kosair Children’s Hospital and made cards to accompany the toys.

Also notable was the program for the Jewish Heritage fold: the girls discussed how G-d could allow the Holocaust to occur and commemorated those who perished. The program ended with, “And remember, you too hold strength and you too hold passion because we are B’nai B’rith Girls. It is our code, our BBG code to live the legacy of those who were unable to make it through Holocaust.”

On March 1, Drew Corson AZA held their Aleph in Training Sleepover for 8th graders at the Kobys’ house. Chapter members explained the traditions and customs of AZA to the AITs (Alephs in Training) and inducted those who were in attendance.

On March 14, Drew Corson AZA continued their tour of local synagogues by attending Shabbat Services at Kenneth Israel Congregation. Then, on March 15 Drew Corson AZA hosted their annual Selection Sunday event at Gattiland for all of Louisville BBYO.

Louisville’s AZA chapter has enjoyed a month full of programming both with bonding as a brotherhood and connecting with their sister chapter, and looks forward to more events in April.

J-Serve: Hunger is Not a Game, by Natania Lipp, Teen Topics Editor

Based on the popular novel and movie series The Hunger Games, Louisville teens recently made the statement that “Hunger is Not a Game,” naming their most recent community service project with the latter title.

On the Sunday afternoon of March 23, children and teens of all ages filled the upper gym of the Jewish Community Center for a Jewish youth-sponsored carnival. Teen volunteers staffed different stations, from the bouncy house to corn sacks and other fun games. While snacking on snow cones and popcorn, participants may not have noticed all of the food and money being collected for donations to the JFCS food pantry.

The “Hunger Is Not a Game” carnival took place as the annual J-Serve event, an international initiative for all Jewish Youth Groups to come together to make a difference in their community. Chaired by 11th graders Elana Wagner and Daniella Reuter and assisted by 10th graders Maddy Geer and Daniel Hemmer, the event was a huge success, and Jewish Family & Career Services is excited to have extra items right in time for their Passover food drive. Now, teens and families can enjoy the upcoming Passover holiday, knowing that others will have kosher food available as well.

To continue their focus on hunger awareness and prevention, Louisville teens plan to hold a food stamp challenge in the near future. They will introduce peers to the nutrition hurdles that low-income Americans face everyday. The Food Stamp Challenge requires families to eat on a daily budged of $4.50, the approximate allocation of food stamp benefits. The challenge will definitely be difficult, but may give participants a new perspective and even inspire them to help put an end to hunger.

Dear Friends, I would like to take this opportunity to thank all those involved in putting on the 16th Annual Louisville Jewish Film Festival. Our committee, headed by Keiley Caster, and Marsha Bornstein, Film Festival director at the JCC, did …

Eat this, don’t eat that. This diet works, this diet doesn’t. Health news and information can be confusing, even contradictory. That’s why the JCC is offering a nutrition workshop Sun., March 30, that will address important nutrition issues such as …