On Saturday, December 3, over 50 Jewish teens and their parents came together to celebrate the culmination BBYO’s Global Shabbat weekend with a Havdalah celebration.

The theme of BBYO’s Global Shabbat weekend was “Be a Gamechanger” and each city was tasked with inviting a local Gamechanger to come and speak to the group. This year, the group was lucky enough to be joined by Teddy Abrams, the music director of the Louisville Orchestra. 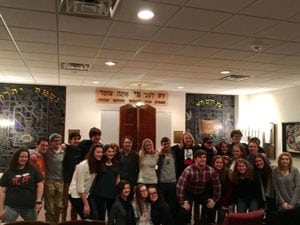 The evening, which was hosted by Keneseth Israel, began with a short introduction by Charles Bessen, who is currently serving as the Kentucky Indiana Ohio Region’s Shaliach, vice president of Jewish heritage, community service, and social action. Bessen clarified the intent behind inviting Abrams, and explained how his incredible success at such a young age inspires so many in the room.

The service, which was planned by local chapter Sh’lichim Andrew Tuvlin and Carly Schwartz, not only incorporated the traditional prayers and songs, but also included an intergenerational component. Throughout the service, various teens and parents gave short speeches describing BBYO’s impact on their lives. Some spoke about the leadership tools that BBYO has provided, while others conveyed their pride in watching their children grow through BBYO experiences.

While introducing Abrams, AZA Chapter President Joey Schuster stated, “Teddy exemplifies what BBYO teaches all of us; that if you put in the effort, any dream can be reached.” 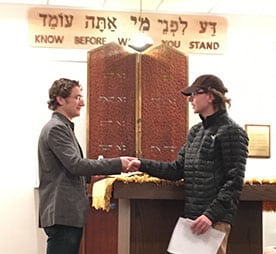 Abrams spoke to the attendees about following his dreams, and his intentionality behind his career path, describing his decision to become a conductor after attending his first concert at age nine.

The families were eager to hear about Abrams’ response to Muhammad Ali’s death, and the spontaneous informal concerts that followed. After Abrams finished his speech, he was officially inducted into Drew Corson AZA by Schuster.

Abrams’ speech was interesting and informative, and the families left with a great appreciation for the arts and for the entire community of Louisville, which Abrams explained was unlike any other community of which he had been a part.

Fifteen teens left the event with complimentary Louisville Orchestra Hall Passes, which allow students free admission to multiple concerts throughout the season. The evening was a great success, and Louisville BBYO is very grateful to Abrams and the Louisville Orchestra for helping to make their Havdalah service so special.

Nearly 50 women participated in the Women’s Philanthropy Connecting with Culture event on Friday, November 18, and they were treated to the Louisville Orchestra’s Coffee Concert, lunch overlooking the plaza behind the Kentucky Center for the Arts and a visit …

Our country has just faced a very difficult election. It was by far the most divisive election in recent history. Even now, after the democratic process has brought us a leader, there remains much discord and conflict. What guidance can …