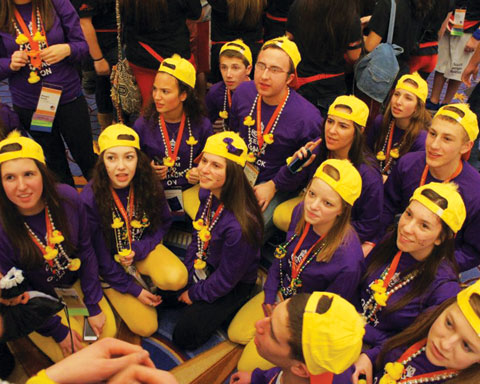 International Convention 2013: “From the Roots We Build” took place in Washington, D.C., from February 14-18. Over 1,500 teens representing 18 different countries from across the globe attended.

Over the five days, teens reunited with friends from international programs and made many new friends from around the world.

IC began with an incredible, heart-racing opening ceremony that included a welcome video message from President Obama. The president addressed the audience, “this gathering gives you a chance to affirm your faith and recommit yourselves to the enduring values this organization represents.” He then encouraged the teens to return home, spread their enthusiasm and show the important role that teens play in making a difference in society.

The Convention body also heard from Michael Froman, assistant to the President of the United States and deputy national security advisor for International Economic Affairs. Froman, an alumnus of BBYO and former grand aleph godol (international teen president of AZA), referenced BBYO as having contributed most to who he is today.

During the first day, all of the participants went into D.C. for a day of community and advocacy called BBYO Stand Up Day of Service and Advocacy. It started with the presentation of the Annual BBYO Stand UP Lifetime Achievement Award to DNC Chairwoman and Congresswoman Debbie Wasserman Schultz, who spoke about the importance of standing up for critical causes of the day.

The Convention body also heard remarks from Josh Mandel, a Marine Corps veteran and state treasurer of Ohio. Wrapping up the plenary, United States Ambassador to the United Nations Susan Rice delivered a call to action before the delegates went into the D.C. community for hands-on service and advocacy training.

At the end of the day, teens attending the convention helped more than 40 organizations all over D.C. and served a grand total of 6,000 hours. That night teens welcomed Shabbat and attended different services and electives.

On Saturday, attendees spent the day rotating between electives. Saturday night included a Havdallah service and  the awards gala where the State of the Order was given by the international n’siah and grand aleph godol (BBG and AZA presidents).

Sunday morning teens woke up bright and early and attended elections of the 69th BBG and 89th AZA international boards. Sunday night, the final night of IC 2013, Hoodie Allen and Timeflies performed, which was the end of the best and largest International Convention in BBYO history. It was truly an unforgettable experience!

Yes, March is the month famous for basketball, but Jay Levine BBG has experienced March Madness since Day 1. From new MITs to basketball picks, the Toucans have been nonstop active.

On March 3, the board welcomed eight eager MITs (Members in Training) with a BBYO introductory meeting. The girls learned about everything BBYO, from regions to traditions to songs. They were able to ask questions and learn about what the Jewish teens in BBYO get to do in depth.

Their parents, on March 12, were then invited to a PIT (Parent in Training, because it is that serious) meeting to learn about what their daughters will be doing in BBYO. The girls were all extremely excited to begin BBYO, and it is clearly a promising recruitment group.

March 8-10 was a memorable weekend for the teens who went to Hamilton, OH, for the Kallah convention. The weekend was filled with activities from a Holocaust memorial to song sessions, all followed by a sleep-filled bus ride home.

With new MITs involved, Jay Levine stepped up their game and had events every weekend of March. On March 15, the girls and Drew Corson AZA got together for a Shabbat dinner. Hillary Reskin and Ben Koby led Friday night services, the candles were lit, and challah was chomped on.

The evening continued with dinner provided by each of the teens (potluck is always a favorite!) and the election of the chapters’ beau and sweetheart. The beau is Eli Gould and the sweetheart is Maggie Rosen.

On March 22, Jay Levine will be holding a six-fold sleepover: Silver Linings Playbook. The board, along with eight chapter members, has been working endlessly to plan fun and meaningful programs and are looking forward to the night. It’s sure to include lots of bonding, tons of food, and endless good times. If you are an eighth-grade girl, look for your invitation in the mail!

March has proven to be jam-packed and totally fun, and the girls are anxiously awaiting the last half of the term.

Drew Corson hosted a Kidnappings Program for the eighth grade members in late February. After the overnight programming, all present went to Waffle House and then to Skyzone to participate in the eighth-grade recruitment kickoff with Jay Levine.

From March 8-10, four Drew Corson members attended Regional Kallah in Hamilton, OH. The Drew Corson boys learned many things about their Jewish identity and helping others.

On March 15, the Drew Corson boys and Jay Levine girls gathered to have a Shabbat dinner. There were some great food and services, and the Beau and Sweetheart were elected by the present members of both chapters.

On March 17, the AZA boys met at the JCC to have an AIT meeting. The eighth graders learned about BBYO and AZA, the founding of both and more on what makes the Drew Corson chapter great. After work was some play. AZA met up with the BBG girls at Gattiland for Selection Sunday. Everyone enjoyed pizza and games while waiting for the NCAA tournament brackets.

JCC of Louisville Camp Tikkun Olam was selected as one of 38 North American summer camps to participate in the 2013 Camp Philanthropy Program of the Jewish Teen Funders Network (JTFN), a youth philanthropy project of the Jewish Funders Network. Through the JTFN Camp Philanthropy Program, Camp Tikkun Olam will create a Jewish teen foundation, in which campers will work together as a “foundation board,” giving away real money to non-profit organizations of their choosing.

Recognizing the potential of Jewish youth philanthropy programs to empower and educate teens about effective philanthropy and Jewish values, JTFN awarded 38 grants to Jewish summer camps committed to creating high quality Jewish teen philanthropy programs. In addition to a grant of $1,000, JTFN will work closely with grantees on program development and staff training.

Through the grant-making process, campers will review grant proposals from non-profit organizations, visit potential grantees and determine which organizations to support; the philanthropists-in-training will examine Jewish texts, traditions and values related to giving. The program encourages campers to “learn by giving” and will generate at least $38,000 in grants nationwide, with each teen foundation awarding a minimum of $1,000. The program is supported by the Maimonides Fund.

As the new middle school director, assistant camp director and Jewish programmer, I am really excited about getting started with some amazing Teen Connection programs.

On March 11, Teen Connection had an ice cream party where teens enjoyed some delicious ice cream and played Apples to Apples together.

I am looking forward to meeting everyone over the next few weeks. If you have any comments or concerns, please feel free to email me at rlipkin@jewishlouisville.org or call me at 238-2701.

Click Here Learn about the traditions, download Passover recipes and more. In Hebrew, Seder means order, and at the heart of the Seder is the Haggadah, a Passover guidebook that spells out the order in which you and your family …

A delegation of Community Visionaries from the Western Galilee is coming to Louisville from April 26-28, and there will be several opportunities for community members to meet them in both formal and informal settings. The delegation includes: Shelley-Anne Peleg, Israel …