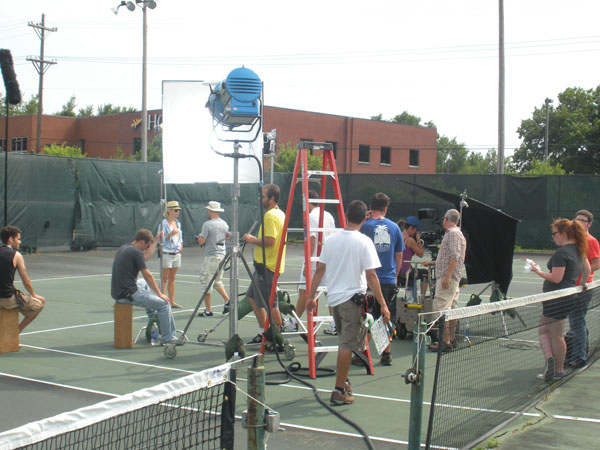 Look for the Jewish Community Center next summer – coming to a theater near you.

Many of you may have noticed the white trucks containing everything needed for set production around the JCC, well, for the past three weeks, the JCC has been the production site of the film Tan Lines.

According to Laura Morton, associate producer and production coordinator, “The JCC was amazing.” Morton continues,  “The JCC had everything we were looking for.” Sometimes when a film is being shot, a site can only be used for a few scenes before having to move to a new site. That was not the case at the JCC.

Tan Lines is the typical underdog sports movie about tennis. The JCC serves as the home base, Derby City Recreation Center, which is the home of some quirky, odd and goofy guys.

“One guy won’t step on lines and one guy doesn’t speak English,” says Morton. With all of their differences they manage to come together to form a team. This team becomes the good guys against the Fountain Club.

The areas of the JCC that were used in the film were the pool house, an office inside the JCC, the tennis courts and the field house. The pool house served as the main building at the Derby City Recreation Center. Morton states, The JCC has “so many different looks and opportunities – with the field, courts, pool house, offices, we weren’t limited with the space.”

Morton explained that the JCC staff was very welcoming and accommodating to challenges of sharing their facilities with the film’s production while they worked. In some cases the film crew even received extra help from the staff. For example, there was an instance when someone could not find a needed item for a scene and that person came “running in to ask for a stapler” says Morton, which the JCC graciously provided.

When the production team needed extras for a film, JCC staff members Kim Hales and Karyn Harkins were there to help.

Morton said, “The very first moment the director saw this place, he fell in love with it.” There is something unique and inviting about the JCC. “When the set crew and extras got to see this great place, they said we need to join,” according to Morton.