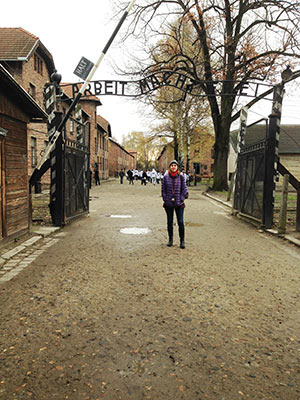 [by Becky Ruby Swansburg]
It hit me, of all places, in Ramallah. Our group sat at one of the city’s finest restaurants, listening to three distinct takes on the peace negotiations between Israel and the Palestinians. That’s where I realized the Holocaust, or rather the lessons of it, were loudly present in the room.

Let me back up.

In October, I was one of eight individuals from across the country who traveled with the Jewish Council on Public Affairs (JCPA) to Poland and Israel. The JCPA is the community-, interfaith- and government-relations arm of the North American Jewish community. Louisville’s Jewish Community Relations Council is our local representation in this organization.

Through the generosity of Louis and Larry Frank of Atlanta, eight young leaders from across America were chosen to explore some of the most pressing issues in Israel today.

Our first stop on the trip was Krakow, Poland, and its close neighbor, Auschwitz. I’d been to the U.S. Holocaust Memorial Museum before, along with Yad Vashem and Dachau. Each time in the past, I was struck by the enormity of the Holocaust. But on this trip, it was different. As we walked the hallowed grounds of Auschwitz, I was struck by the smallness of it all: by the individual stories and individual emotions.

I was rendered speechless at photographs of small children, hands tightly held by their mothers, being hurried to the crematoria. Some had a look of fear or resignation, and others played in blissful ignorance. I was stopped by the bunk beds where 10 frail humans slept. I shivered in the cold Polish weather. I left amazed that anyone had survived the Holocaust at all.

I took these emotions with me as we traveled to Israel for the next portion of our trip. Many people believe the Holocaust is partially responsible for creating the modern state of Israel; that the lessons of Auschwitz made it clear – the Jewish people needed their own homeland.

But I’d like to pose a complementary theory: the lessons of Auschwitz are the spirit of Israel, and help serve as its guiding principles.

I do not mean to imply that Israel is a nation of victims. While our people emerged from the Holocaust that way, what we’ve built in Israel is instead a monument to endurance and hope. What I mean is that Israel has an obligation to approach its domestic and international issues in light of our experiences, and that includes the Holocaust. We cannot treat others as we were treated; we must act with the compassion we were denied.

Our group examined many of challenges facing Israel today. Some are well known: The peace process. Iran. Issues in the West Bank and
Gaza. The rights of the non-Orthodox and women in religious life.
Some of our topics were lesser known to American audiences: The growing underclass of immigrants and refugees from places like Eritrea and Sudan. The proposed resettlement of Bedouin populations in the Negev. The job-placement initiatives for the Haredi population.

As you can imagine, there were diverging opinions on all sides of these issues. But what struck me was how the lessons of Auschwitz – where my group had been just a few days before – informed our conversation on all these subjects.

When we discussed what to do with thousands of refugees within Israel’s boarders, we remembered that we, too, were once refugees looking for a safe home. When we debated the peace process, we were vigilant to separate political forces from the people they oversee. And when we considered the threat of Iran, we couldn’t escape the reminder of what can happen when threats are left unaddressed.

Because the State of Israel is a Jewish state, its policies must be influenced by the Jewish experience: what Israel is as a state reflects who we are as a people. When we view issues through this lens, we see the moral obligation to create and preserve a just, compassionate, strong homeland for the Jewish people.

Last year’s Community Shabbat Dinner at the JCC was such a huge success, with more than 100 people in attendance, it seemed only fitting to have another. This year’s event, which is hosted by Tracy and Mark Geller, Lisa and …

KI Omer Counter chosen for museum display [by Sarah Farmer, Special to Community]Keneseth Israel Congregation has loaned its unique Omer counter for inclusion in the upcoming exhibit Chasing Dreams: Baseball and Becoming American at the National Museum of American Jewish …

[by Bailey Haskell, Special to Community] Very early in the morning in October, seven members of Louisville’s Hillel boarded a plane to Denver, CO. We were beyond excited, and had no idea what to expect in the weekend to come. …