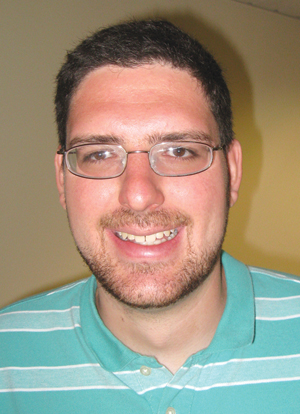 The Jewish Community of Louisville has hired Michael Steklof to serve the Jewish Community Center as teen director/assistant camp director. He began work on August 27, and brings a lot of experience working with children and teens and enthusiasm for his new job.

“I really want to form relationships with all the teens and their families and do innovative programming with them,” Steklof said, “and for camp, I want to build upon all the strengths this camp has.” What would he add? “I’m really into silly songs and silly things kids don’t get to do at school to have fun.”

Although he’s from Rochester, NY, and has never been to Louisville before, Steklof already has met several Louisville teens because for the last three summers, he has worked at Camp Livingston in Bennington, IN, as program director/cornerstone liaison and unit head. A number of youngsters from Louisville attend Camp Livingston and Steklof has already built positive relationships with them.

“I’m glad I know a lot of kids and families from Camp Livingston,” he said, and I’m excited that I get to build deeper relationships with them.”

“In addition,” he continued, “women’s studies is really about social action and volunteering and making the world a better place. And,” he added, “I really like doing programs with teens about those things.”

Camp and youth groups have been a big part of Steklof’s life. He spent five summers at URJ Camp George in Parry Sound, Ontario, Canada in a wide range of staff positions from counselor to assistant program director. He also advised a NFTY chapter (North American Federation of Temple Youth) for five years and a USY chapter (United Synagogue Youth) for a year.

He grew up in a household where public service was the norm. His mother, Amy Steklof, is the town clerk for Penfield, NY; and his father, Kevin Steklof, works for Monroe County, NY.

He also has a brother, Jason, who lives in Brooklyn and works for Keren Or, a Jewish nonprofit agency for the blind; and a 16-year-old sister, Jessica, who lives with their parents.

[by Shiela Steinman Wallace] The annual Federation Campaign is the lifeblood of the community. The dollars raised support and sustain the Louisville Jewish community’s local family of agencies and enable the community to meet its obligations to Jews in Israel …

[by Shiela Steinman Wallace] Keneseth Israel Congregation has announced that Rabbi Michael Wolk has been hired to serve the congregation. Rabbi Wolk was ordained by the Jewish Theological Seminary of America in New York in May, and Keneseth Israel is …

Editor’s note: The following letter was sent to JCL President and CEO Stu Silberman, who shared it with Community. Dear Stu Silberman, What a great time it is to be a member of my Louisville JCC. I have been a …